PALU – Following the 7.4 magnitude earthquake which triggered a 6-meter tsunami on 29 September in Sulawesi Island of Indonesia, a British Muslim charity has sent a team to help some of the 191,000 people urgently in need of humanitarian assistance, Relief Web reported on October 2.

Muslim Aid UK has sent its Head of Mission and Humanitarian Coordinator from the capital Jakarta to Palu city to join three local partners; PKPU, Global Medic, and Rhuma Zakat, to assess the needs and enable a rapid and effective response to help save lives.

So far, the natural disaster left over 1,200 deaths and more than 600 people have been injured. The death toll is unfortunately predicted to rise to thousands.

The Muslim British organization is one of the top 20 UK relief and development agencies. It was set up in the UK in 1985 to provide humanitarian assistance to disaster-affected countries and to help poor communities overcome poverty.

With houses destroyed, and aftershocks continuing, thousands of people are homeless, with more than 48,000 displaced people currently staying in over 200 sites.

Muslim Aid UK works through Yayasan Kemanusiaan Muslim Indonesia (YKMI) to support Global Medic in its response and has initially allocated £50,000 for immediate use. 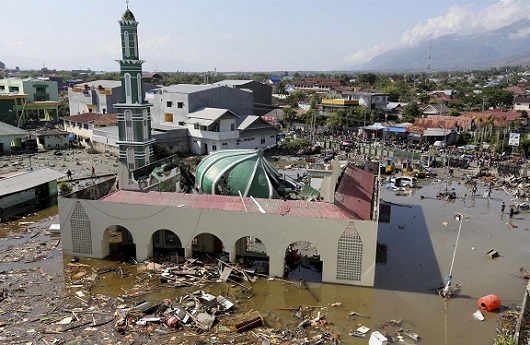 Based on the ASEAN’s Joint Disaster Response Plan (AJDRP), the basic needs are identified as ready-to-eat halal meals, water, sanitation, and hygiene (WASH).

Besides, the RescUAV drones team – 4 drones and 4 pilots work to provide emergency maps, support search, and rescue teams and provide situational awareness (what roads are out, what bridges are out) to the Disaster Management Agency (DMA).

The idea is to provide better information to emergency managers so they make better decisions which result in the more efficient delivery of aid.

Indonesia is the most populous Muslim country in the world. In the 2010 Indonesian census, 87.18% of Indonesians identified themselves as Muslim.