ADDIS ABABA – Ethiopia’s Prime Minister Abiy Ahmed has appointed women to half of his government’s ministerial posts, including a hijabi Muslim defense minister.

“This is to show respect to the women for all the contribution they have made to the country,” Ethiopian Prime Minister Abiy Ahmed told lawmakers in the capital, Addis Ababa, Bloomberg reported.

“The new cabinet is expected to reform their respective ministries, remove the walls of bureaucracy, bring innovation and technology to provide services efficiently.”

Abiy appointed Aisha Mohammed as defense minister and created the Ministry of Peace that will be headed by Mufuriat Kami, the former speaker of parliament, making them two of 10 women in his cabinet.

Others include Adanech Abeebe to head the Ministry of Revenue and former deputy mayor of the capital, Dagmawit Moges, as transport minister. 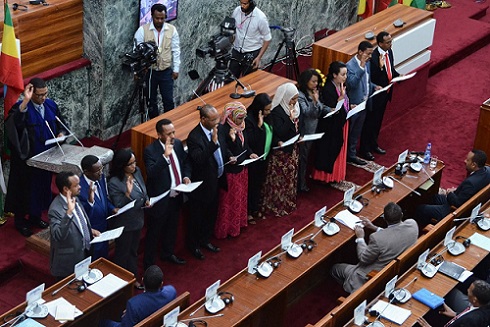 Ethiopia’s newly appointed ministers take their oath of office on Tuesday at the parliament in the capital Addis Ababa. (Stringer/AFP/Getty Images)

The Ethiopian PM has also named Ahmed Shide as his finance minister in sweeping changes to the Horn of Africa nation’s government and reducing ministerial positions from 28 to 20.

“It is a very important and progressive move on the part of the prime minister and very consistent with the transformative agendas he’s been pursuing,” Awol Allo, an expert on Ethi­o­pia at Britain’s Keele University, told The Washington Post.

“I also think it sends a strong message to young Ethio­pian women that one day they can take up positions in the government.”

He has ended two decades of conflict with neighboring Eritrea, released thousands of political prisoners and loosened the state’s tight grip on parts of the economy.