This bloody wakeup call is the road back to ourselves; to connect with our Creator, to achieve our birth purpose, to thrive and to prosper...
aaa

What You Don’t Know That is Causing Brutal Death…

After years and generations of avoiding conflict and bloodshed within the Middle East, Syria has turned into a land of battle.

Syria, the country that sheltered cultural and religious diversities with respect, love and peace, fell into a game of anger and emotions.  Massacre, torture, death and dividends are the price!

With our deeply rooted love for Syria, under these bloody circumstances, we are pushed into a direction that we should have long anticipated. This bloody wakeup call is the road back to ourselves; to connect with our Creator, to achieve our birth purpose, to thrive and to prosper.

How can we connect with God if we don’t know the truth? What is the truth? And why resolving this conflict, making a positive difference and attaining peace are connected to learning and applying the truth?

What Is the Truth?

In the midst of all that we see and witness on daily basis, from death reports to political analysis, we have no choice but to go deeper within ourselves to find answers and figure out the truth of the endless conflict in Syria.

As we reach truthful answers, initiating positive action to create a peaceful change becomes a necessary responsibility in our lives.

The truth is that injustice is the engine of every conflict; however, the misunderstanding of the word injustice and the misapplication of justice are shifting individuals further away from the truth and causing ongoing drama.

There are two forms of injustice. The first is to experience unfairness from others and this is a common test in life. The second form of injustice is to be unjust to yourself. When a person is unfair to himself, greater bitterness, struggle and injustice keeps on hurting, until it visually surfaces with bloodshed and massacres.

An individual is the first cell in a society, and life in general. He has been created and equipped with a mind, energy and body to construct the planet and build a positive difference.

How Can a Person be Unjust to Himself?

Every creature on earth has a task that works hand in hand with other creatures to complete the functionality of maintaining positive production and evolution on earth.

However a human being is the only creature who has been given the choice to work on his assigned task. Honoring the choice of serving his purpose will warrant blessing that will bring him happiness, freedom and prosperity. Letting go of his responsibility and task on earth, will get him to struggle, live in misery, chase illusions and consume his life, time and energy so that he becomes unjust to himself.

God honored a human being with a mind to operate and lead, a body to move and work, and energy to live and connect with Him; He gave him a choice to utilize those assets in serving his assigned purpose or consuming his energy.

Man is either a leader, a victor, triumphant and reformer. Or  he is a victim, a failure and a follower; therefore he created his own injustice by himself.

The undeniable reality of the chronicled conflict that keeps moving from country to country in the Middle East is the actual proof that individuals are not honoring the purpose of their creation.

Therefore, bloody death is the result.

Allah Almighty says in the holy Qur’an: [Yet your Lord would never destroy the towns through injustice, on His part, against them, while their inhabitants were righteous, that is, believers.] (11:117)

It is very clear that brutal death in towns cannot be blamed on God because He is never unjust.

However, as it is mentioned in the above verse, lack of reformation is considered a way for an individual to be unjust to himself. When this pattern of self-injustice spreads to reach the majority, injustice will hunt towns back with greater devastation. 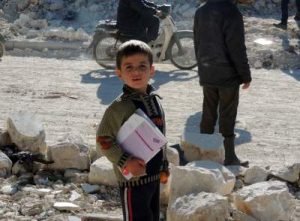 If this energy, life and time are not targeted on daily basis into reformation and construction of earth, it will be consumed and wasted into negativities, conflicts and endless failure. Bloodshed is the visual picture of life consumptions. A human being has been given a choice to determine how to utilize his given energy, life, time and assets to honor his role on earth.

The verb “reform” means to improve, correct or change for the better.

Based on the definition of the word, individuals in Syria have the right to protest in the city and to improve or remove the government with the intent to reform.

If this is correct, why are present injustices like torture, rape, massacre and brutal murder of civilians, taking place in Syria’s cities?

The mentioned word “reformers” is conditioned by its meaning and gradual by its application. Before a person is considered a reformer on earth, he must reform himself first. As he improves and corrects his morals and behaviors, he gets to learn his assigned purpose and learn what to build on earth and how.

As he initiates action toward implementing this task, every distracting or evil power is destroyed by God to facilitate his mission of achieving positive goals.

However, when individuals don’t start correction within themselves first, any action is taken to correct others is considered hypocrisy and an act of control. So the control that they are complaining about is actually practiced by them as well. And the death that is taking place is a result of two controlling powers, meaning that it is a war of the jungle, not an act of reformation.

The way to reform is not to rebel, but to change yourself, your morals and behaviors to be able to handle the responsibility of your gifted life, energy and time, so that you can act on your assigned task to build earth.

And as individuals work in this direction, every evil or wrongful power will be removed out of their way or destroyed by God.

From this point of truth, every individual holds a serious responsibility to change himself in a way that qualifies him to achieve his constructive purpose on earth.

Every individual is accountable for reforming himself from within to connect with God and become a positive asset who makes a difference on earth.

Ask yourself “What do I need to reform myself from within and apply my daily actions to receive God’s blessing and protection?”