Well, well…a new app has hit the market with an incredibly addictive fever.  According to the New Yorker,  Pokemon Go “started as an April Fool’s joke.

Google released a funny video that mashed up Google Maps and Pokémon. The video, released on April 1, 2014, went viral, drawing more than eighteen million views in all.  Two years later, Pokémon Go—a game that encourages you to get out in the real world and use your mobile phone to catch Pokémon was released”.   Interfacing the users geographical location and simulated rewards systems,  Pokemon Go may seem more like a Pavlov experiment to those privy of psychological conditioning.

Pokemon Go dates back to Nintendo and the animated cartoon and stacks of playing cards that went viral in 1996.   Based on creatures  that players utilize to battle one another, Pokemon Go has already been downloaded “7 million times in the U.S. since its release on July 6 -2016” .

For over a decade, people have been glued to phone screens, FB, Twitter, and other online social media.  Having virtual friends, virtual experiences has become the norm.  Online games and the ability to complete a lot of daily tasks online have replaced the in person, face to face interactions,  games and social life as we once knew it.

The younger generation has come to equate life in almost all of its entirety with an iphone or android.  Just look around you.  On the bus, trains, people walking in the streets-most have their heads down, staring at a screen which has taken over-or in some cases, has replaced their life. There have been several incidences on buses and trains wherein a gun man was pacing up and down the aisle, passing seats of people but no one noticed.  Only when the gunmen shot someone did people look up and notice the now actualized danger.

Young people growing up now have lost much of the art of face to face conversations and experiences.  We live in a society that has conditioned people to interact, communicate, do business, take classes, find enjoyment-mostly online.  Has this been one of the greatest social experiments of all time?  Getting people to “tune in, drop out” of society so they do not notice what is going on around them?

Now comes Pokemon.  Based on its premise, the user must now go out into the real world!  And, what is even more enticing is that you get rewarded for it.  What a novel idea!  The rewards are not greeting a friend, seeing a beautiful bird, feeling fresh air, feeling the sun’s warmth or even sitting in the grass with family or friends for a picnic lunch.  The rewards are catching little virtual creatures by walking around (either solitary or in groups)  and getting “buzzed” by your phone when you are successful or when you pass an establishment that is Pokemon is near or connected with.  How rewarding is that!

At least it can be said that Pokemon is taking users a little more out of the bubble of an onscreen life wherein the iphone or android has become an extension of the hand, eyes and mind.  However, is this new form of admixture of reality and the virtual world prepared to create meaning existences?  Or are people going to be walking around aimlessly, obsessed with virtual creatures, oblivious to the surroundings they are in?  What about real creatures?  Ahhh, such as people?

Is Pokemon a multi-interactive platform with the goal to slowly re-introduce people to real life, slowly weaning them off of a virtual existence, or is it another experiment in mind control and conquest?  Wired states that “Pokémon Go is unique (and perhaps uniquely addictive) because it interfaces with the real world. Augmented reality could be a gimmick, or it could be the key to a whole new market of games”.

In observation of this statement, my question would be “why is it unique to interface with the real world”?  When analyzing this, it brings up many troubling issues both psychologically and socially regarding our dependence and a total immersion on and in a false reality-another dimension in the human mind wherein the only reality is a virtual reality sprinkled with a few left over threads of real life-as it used to be lived and known.

Psychology Today discusses the pros and cons of Pokemon Go.  For the purpose of the article we will look at the cons:

-While this app does encourage outdoor play, you’re still plugged into technology. 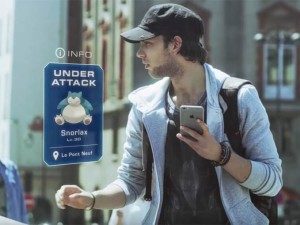 -The game puts you in a heightened “stressed” state

-The game could exacerbate symptoms in people who have difficulty with separating reality and fantasy.

The first con is already a known fact of users heavily involved in online life.  The following cons such as increased stress, increased ability for distraction and the exacerbation of symptoms (in psychosis, mental illness)   and for those who have trouble distinguishing realty from fantasy is troubling.  If we look at the last three, we must ask, just what is the goal of Pokemon regarding the general population of users?

Given that the users are generally younger, are they more vulnerable to programming of their minds as well as being at risk for increased mental health issues or even psychosis by being embroiled into the Pokemon craze?  These are questions that not only researchers must ask and explore, but parents and even users themselves must consider.  Subliminally conditioning and programming of populations of people is no secret.  It has been going on since time began.

Business2Community outlines the psychology of Pokemon Go and how it capitalizes on six psychological principles.  Listed as the driving psychological principles are: Curiosity, Fear of Missing out, The Ikea Effect (the more effort we put into obtaining an item or reward, the higher value we place on it), The Endowment Affect (feeling ownership and value), and Operant Conditioning (see Classical Conditioning and Pavlov’s dogs).

These 6 psychological principles of marketing are in effect what create an addiction.  Thus in essence,  Pokemon Go creates an addiction while psychologically weakening the human mind/psyche to the possible point of psychosis in vulnerable individuals.

“Operant conditioning focuses on using either reinforcement or punishment to increase or decrease a behavior. Through this process, an association is formed between the behavior and the consequences for that behavior.

For example, imagine that a trainer is trying to teach a dog to fetch a ball. When the dog successful chases and picks up the ball, the dog receives praise as a reward. When the animal fails to retrieve the ball, the trainer withholds the praise. Eventually, the dog forms an association between his behavior of fetching the ball and receiving the desired reward” .

As one can see in Pokemon Go, this principle is being used.  Replace the dog with people and the ball with the App.  The rewards systems set up within the Pokemon Go App can form associations between behaviors such as running through the streets at midnight to gathering in crowds near a high ledges all in pursuit of the grand Pokemon reward.  Like lemmings running towards a cliff in pursuit of suicide, Pokemon Go, if orchestrated properly, may be able to get people to do just about anything if they are conditioned to  react to the stimuli and reward offered.

Additionally, if one were to provide the stimulus but withhold the Pokemon reward, would people still have the same response (i.e. running in search of something) or would they be able to break away from this conditioned learning and think for themselves regarding the mission they were on.  From this perspective, Pokemon Go has the potential to teach/program certain responses to stimuli to produce desired behaviors from participants. 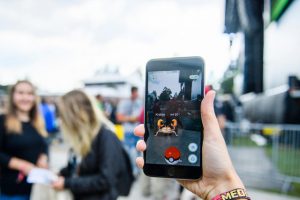 Should the game designers ever desire to introduce and associate dangerous or immoral stimuli with a reward, would the people who have been using this app recognize it and be able to un-learn their conditioning?  Or would they blindly react to the stimulus presented?  These and other ethical questions need to be examined further.

As if living life through a virtual reality was not bad enough, we now have a highly addictive app with the potential to cognitively restructure thinking patterns into a possible mental illness.  What will developers come up with when we have a sub-population of  Pokemon Go users who are willing to do anything, anything to find their target?  Are these virtual-virtual reality games the beginning of something more sinister such as programmed soldiers?

This and other questions are vital concerns that need to be answered.  When an industry has control over a population’s thoughts and actions so as to cause a great decrease in participation in real life and reality (online life) and then creates psychological apps which have the power to restructure thinking patterns (addiction) to make-entice people to do what it wants (find the Pokemon), we have serious issues.