Saimah Arshad knows the terrain when it comes to clarifying doubts about Muslim-oriented products. As a busy entrepreneur, she’s also figured out a few of the secrets for evolving herself into a full-time businesswoman.

Ms. Arshad, CEO and founder of Salaam Nutritionals, got her start in the halal multivitamin business in 2013 while researching alternative forms of gummy-based vitamins for kids. Because of her background as a pharmacist, other Muslim parents were constantly asking her which brands of vitamins their kids could take.

At the time, Ms. Arshad noted, “The market was saturated with [non-halal] gelatin-based gummies and the kids couldn’t stand the chalkiness of the traditional chewable vitamins like Flintstones.” Unfortunately, the gelatin-based gummies available were not certified halal. She set out to fill the need for a delicious, safe, and halal product.

Ms. Arshad says that she didn’t know the first thing about business when she started, “but what I did know,” she explained, “was that a successful business will always survive if it solves a problem – and the Muslim community definitely needed a solution to this dilemma.”

Though Ms. Arshad now has a team of financial advisors and partners to collaborate with, in the beginning she was completely on her own. She reached out to various food scientists, formulators, and manufacturers to see if a halal certified gummy was feasible. She faced rejection after rejection for almost a year because nobody was willing to manufacturer a certified halal gummy. But she pressed on as part of her mission to prove to her manufacturers that the demand for this product was worth investing in with her.

Ms. Arshad clarified that the biggest hesitation manufacturers had was in producing a gummy vitamin without the gelatin. “Gelatin is a cheap and pretty standard gelling agent used to set gummies” she stated, “For them to deviate from that and go with pectin, and to recreate a formula with me for millions of gummies, was not something they were initially excited about.” 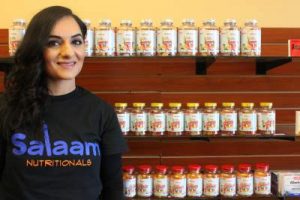 For years, gummy bears and vitamins had also been made with [non-halal] gelatin. For decades there was no real push for manufactures to create products to meet the dietary needs of Muslim consumers.

Ms. Arshad believes that part of the reason nobody was choosing to accommodate the needs of Muslims was because too few Muslims were voicing their concerns and demanding change in the industry. Many Muslims were eating non-halal gelatin-based gummies out of necessity, or choosing to avoid the gummy vitamins altogether. Some were forcing their kids to chew or swallow big bulky tablets, and others were just foregoing supplements completely.

Over the course of her retail pharmacy career Ms. Arshad had met thousands of Muslim customers and she understood that there was a strong niche that needed to be filled. She decided it was going to be her mission to find and convince American manufacturers of the need to use pectin as a gelling agent. She was also going to make sure her gummies were halal certified.

Ms. Arshad presented to manufacturers at length about the 7 million Muslims in the USA and also Muslims’ $170 billion in spending power worldwide. With the average American Muslim family earning around $50,000/year, and having advanced degrees, she set out to prove that Muslim families were willing to buy high quality halal products for themselves and their children.

Ms. Arshad also showed that the average Muslim customer is much like the average American customer. Their spending habits are dictated by their dietary needs, socioeconomic status, education, and wants. Yet, it still took some time to convince manufacturers that it would be financially rewarding to walk down this path with her.

To further convince one manufacturer she also revealed that using gelatin in gummy-based products was excluding other populations such as vegans and vegetarians. Ms. Arshad also described how the push-back didn’t end there, “Once we got over the hurdle of switching to a pectin-based gummy we needed to discuss the importance of having the halal certificate to ensure that the whole facility, including the machinery, was up to Islamic Standards.

Ms. Arshad hired a surveyor from IFANCA [Islamic Food and Nutrition Council of America] to fly out to the manufacturing plant and meet with the facilities manager. “This was to ensure all the ingredients, bottling, packaging, and machinery were free from traces of alcohol and pork,” she clarified. “This certificate is renewed annually to ensure we’re keeping up with good Islamic practices. It also gives reassurance to our customers that we’re taking care of what goes in our gummies.” 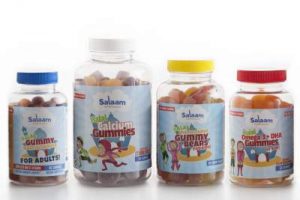 For years, gummy bears and vitamins had also been made with [non-halal] gelatin.

Ms. Arshad’s biggest message to other budding entrepreneurs or business owners is to not give up. It took her two years to start her company from the ground up. But Ms. Arshad didn’t surrender because she knew there was a strong market for her halal vitamins. Most importantly, she believed in herself and her product.

Her advice? “Never take ‘no’ for answer,” she says, “and always look for alternate ways to create opportunity.” Her favorite quote is, “Be firm with your goals but flexible with your methods” and it’s a motto she lives by as her company’s product line grows – reaching more families day by day.

For product information, nutrient guide, and to learn more about the Salaam Nutritionals’ story, reach out via their website: salaamnutritionals.com. You can also purchase through Amazon and other major retailers.