This post was first published in 2016. However, since the Syrian war is still on going and the crisis of Syrian refugees is still worsening everyday, we find it important to highlight this post and remind people of their vulnerable fellow Muslims who need their help.

The festival of Eid al- Fitr is one of the most important days for Muslims all over the world, but for the Syrian refugees there is little to celebrate this year.

Over the last five years, Syrian refugees have faced increasingly desperate living conditions. With little income, high living costs, and no foreseeable future, many have been forced to forgo the luxury of holiday celebrations. Eid has instead become a time for mourning.

On Eid al- Fitr, we won’t forget them, we remember their losses, we commemorate their strength, and we do what is in our power to help.

Below is a story of a Syrian refugee, who was forced to leave his war-torn country.

They say, ‘Why do Syrians leave their country and migrate?’ But we had no choice but to leave.

In Syria, there was no electricity, no water, no food. We were living a difficult life, worse than you can even imagine.

We were on a boat heading toward Europe when, in the middle of the sea, the motor broke down. Water started coming in the boat.

My children were in a room with my wife and other women and children. They were screaming and crying and asking God for help. In this situation, only God can help. My wife and children drowned in the sea. I stayed in the water looking for them for two hours.

I hoped I would find my wife, one of my children, anybody who was alive. Many of the other people who were on the boat died. They were all floating in the sea and not moving. They died from the cold.

After two hours, a fishing boat came and rescued us. After 12 days, they found a body washed up on the beach. They asked me if I knew this child. I said, ‘Yes, this is my daughter, Sajida.’

After that they showed me four other bodies—more of my children who had died. They gave me the bodies of my children in coffins, and I buried them back home in Syria. 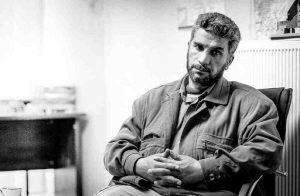 They left Syria alive but returned there dead. They had left for Europe so they could live a normal, happy life.

Sometimes I find myself talking to my son, Mohammed. I say to him, ‘Come on, Mohammed, let’s go and play,’ and then I realize he is no longer with me. He drowned in the sea.

Imagine a father living with his wife and seven children and all of a sudden losing all of them. How would he feel?

How am I going to keep on living now? To God we belong and to Him we shall return. This is God’s will.

At this special time of the year, let us try to bring joy to the refugees and ease some of their hardships.

You can help them and share happiness of Eid by donating to Muslim and international organizations that support refugees.