Shirin Ebadi from Iran, Tawakkol Karman from Yemen and Mairead Maguire from Northern Ireland were on a mission to assess the violence committed against Rohingya women and the situation of Rohingya refugees in Bangladesh, the Nobel Women’s Initiative, a platform of six female peace laureates established in 2006, said.

They also met with Bangladeshi Prime Minister Sheikh Hasina and other officials and volunteers during their visit.

“If she fails to do so, her choice is clear; resign or be held accountable, along with the army commanders for the crimes committed,” said Tawakkol Karman. 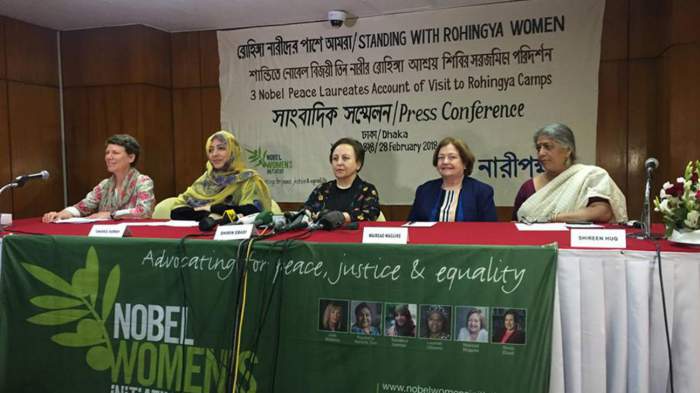 Tawakkol Karman, Shirin Ebadi and Mairead Maguire – call for an immediate end to the “genocide” of the Rohingya people. Photo: Porimol Palma

Thousands of Rohingya Muslims have fled Myanmar to neighboring Bangladesh over atrocities committed by security forces and Buddhist mobs since August.

Hundreds of Rohingya women were reported to have been raped and killed by soldiers and mobs during the attacks.

The United Nations and the United States have described the army crackdown on Rohingyas as “ethnic cleansing.”

Sunday marks the six-month anniversary of the start of the Rohingya refugee crisis, Asia’s worst since the Vietnam War.

More than 750,000 refugees, mostly children and women, have fled Myanmar since August 25, 2017, when Myanmar forces launched a crackdown on the minority Muslim community, according to Amnesty International.

At least 9,000 Rohingya were killed in Rakhine state from Aug. 25 to Sept. 24, according to Doctors Without Borders.

In a report last December, the global humanitarian group said the deaths of 71.7 percent or 6,700 Rohingya were caused by violence. They include 730 children below the age of 5.

The UN has documented mass gang rapes, killings — including of infants and young children — brutal beatings and disappearances committed by security personnel. In a report, UN investigators said such violations may have constituted crimes against humanity.