The setting up of women-only mosques should be a wake-up call to the mosques currently excluding or not providing good facilities for women.
aaa

My first memories of mosques as a female convert in the UK are of waiting around for a reluctant male mosque member who could unlock the door to the dingy, cramped ‘women’s’ room.

When I visited Pakistan, I had to plead to be shown the local mosque – it just wasn’t somewhere women went. I was able to attend the capital city’s mosque, but there was no room for women to pray for the Jumu’ah prayer, despite it being a huge mosque; I became a spectator of my own religion.

So, is it surprising that Muslim women have taken things into their own hands, with women-only mosques being set up around the world. In fact women-only mosques have been in existence in China for around 300 years, in order to preserve the local Muslim community and provide women’s education.

The Islamic permissibility of these types of mosques has been questioned, but what about questioning the limited women’s facilities found in many mosques? We have here some varied views and experiences of Muslims from around the world, and thoughts on how things can be improved so that each and every mosque is appealing to both men and women.

Nawal, from Denmark is fully aware of the spread of women-only mosques – one in Copenhagen has recently been highlighted in the media. She thinks that women feel ignored and are not taken seriously by traditional men-led mosques:

”People (mainly men) are against it and saying this is wrong and un-Islamic. But perhaps this is a cry for help as so many women are not being taken seriously or heard.“

Laura, from the USA, has experienced both welcoming and unwelcoming mosques:

“As a brand-new Muslim, I went to a masjid in Washington, D.C. with my husband… When we got there, I got a glimpse of the main prayer hall – it was gorgeous: domes, chandeliers, large light-filled windows, plush carpet – but I had to go downstairs to the women’s section. It was like descending into the dungeon of a castle. As a new Muslim, I felt like women were being treated unfairly at this masjid. Why the enormous discrepancy? If they spent millions on the main prayer hall, couldn’t they allocate funds to make a musallah (space for women to pray) for women that didn’t feel like an underground bunker and smell like a sewer?

In Southern California, I was so relieved that all the mosques had prayer spaces that were equally accommodating for both genders. Some mosques even had special rooms for moms and babies. Personally, I don’t think women should have their own masjid, but I do believe that existing masjids should welcome us, give us clean and adequate prayer spaces, and benefit from our many skills (leadership, fundraising, organizing, planning, communications, and more). Women are a dynamic and valuable part of this Ummah and should be treated as such.”

Suhayb from Sweden sees there being two sides to why women feel they need to start their own mosques – so they don’t have to interact with non-mahram men and because of poorer facilities:

“Some women feel more comfortable when there aren’t any men are in the mosque. Generally, less women come to mosques than men as going to Jumu’ah is obligatory for men, but if a woman stays at home, God will appreciate the man the same as the woman so naturally fewer women will go to the mosques. Due to this, you’ll see a lot smaller and cramped areas for women due to there being fewer women coming.”

As for solutions, Suhayb is not optimistic:

“In a perfect world you could give sisters the same facilities, but it doesn’t happen due to limited mosque budgets. So at the moment, some Muslim women are doing what feels best for them”

Timea, who is from Hungary, lived in Egypt for a couple of years, and found she was not able to pray in certain mosques:

“In many mosques in Cairo, women are not allowed to pray behind men even though there would be plenty of space (they say women praying in the same room is haram). Once, I had to pray next to the mosque on a piece of carpet just because there were some men inside!”

She has found the way many mosques are set up, separating women completely, makes it difficult to follow lectures because they can’t see or hear the speaker properly. 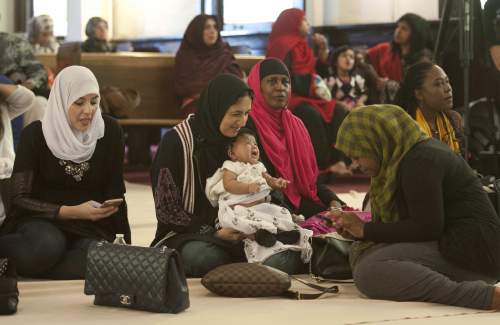 Several sisters mentioned that children as well as women feel unwelcome in many mosques.

“Alhamdulillah, here in Budapest, there is one mosque where men and women are together in the mosque. Obviously, they don’t mingle, but they listen to the lectures together, if they want to, but both have separate places to enjoy some privacy without the presence of the opposite sex – and they pray together, women praying behind the men. I really like this way, and as far as I know this is how the Prophet’s mosque used to be.”

Asiya lives in Istanbul, and points out that all over Turkey, every single masjid, even the smallest masjid you find by the roadside, has a space for women. Women enter through the same door as men, and most have an entire floor the size of the masjid for women.

In her experience, it is mainly an issue in Asian-run masjids, where the concept of “purdah”, a Hindu cultural practice where women are neither seen nor heard, is prevalent. She has also felt unwelcome at Arab-run mosques:

“On trying to find the prayer place, I have heard brothers in several Arab-run masjids tutting, saying “Astaghfirullah” if I have wandered past the men’s entrance, or ask them where the women’s section is. They seem to have different cultural ideas about women and their role in public, and this doesn’t correlate with what I have read about the role of women in the time of the Prophet (PBUH).“

Several sisters also mentioned that children as well as women feel unwelcome in many mosques. There is often a lack of facilities for children, so for practical reasons, they just don’t go.

“Children also are more than welcome [to mosques in Turkey] – you even see complete strangers in the masjid just pick up people’s children, play with them, kiss them, and give them sweets. If you did that in the UK or the US, parents’ first thoughts would probably be that you were planning to kidnap their child!”

Malik  from the USA is not happy that men have created an atmosphere that has caused sisters to feel they need their own mosques:

“As a husband and father, I refuse attend a masjid where my wife is not being fed spiritually; and just as important, their space must be equal to that of men.”

If mosques want to appeal to all members of the community, male and female, they need to provide comfortable facilities for all, including those with children. We have seen that attitudes around the world vary towards women attending mosques, many still being negative, despite this being contrary to the practice of the Prophet (PBUH) and his companions.

All Muslims, female and male, can benefit from and contribute to the community by being part of their local mosque – the setting up of women-only mosques should be a wake-up call to the mosques currently excluding or not providing good facilities for women. There are some mosques with welcoming facilities for all, but in many parts of the world, they are still few and far between.