Talking about women with power is often still, in the 21st century, a controversial or sensitive subject. The poster of Rosie the Riveter girl with a clenched fist and a red bandana was iconic in popular culture, but it was not until the late 1970’s that female power was considered as a significant agent of change within the society of the western world.

About 400 years ago in the Islamic World, the Ottoman Sultanate was ruled by a self-made woman whose name is remembered for her bold steps to accessions.

Her name is Hurrem Sultan, known in the western world as Roxelana and was once a slave from the Crimean area. She eventually succeeded to gain power and exert a great influence in the Ottoman Sultanate and the European society.

Hurrem Sultan was born as Alexandera or Anastasiya Lisovskaya on March 19, 1534 in Rogatyn City (Now part of Ukraine). At the age of 12, she was kidnapped by the Crimean Tatars who frequently raided the region. She was sold into the Ottoman Imperial palace in the early sixteenth century.

In the year 1520, Suleiman I was in the throne to succeed his father Selim I. There, he met Hurrem between year 1517-1520 in the age of 15. On a short time, Hurrem bore the first son of Suleiman I, Mehmet in 1521, just a year after Suleiman’s ascension to throne. Her quick rise as an important figure in the sultan’s side brought many speculations behind the harems wall and spark rumor through the region. She looked different than the other women within the harem. Her skin was rather pale and her hair was red.

Her way to accession

Hurrem was witty, cheerful and joyous hence the name Hurrem (from Persian: خرم‎ Khurram, “the cheerful one”). She showed her intelligence in her passion to learn the Ottoman language, mathematics, astronomy, geography, diplomacy, literature and history. Apart from this, she was very interested in alchemy.

During the excavations in the Edirne Palace, some of her tools for preparation of perfumes were discovered. Because of this advantage, Suleiman did not only see as a beautiful company who later became his legal wife, but also an advisor for himself as a Sultan. Hurrem’s relationship with Suleiman was rather romantic, particularly when he was absent from Istanbul on his numerous military campaigns. 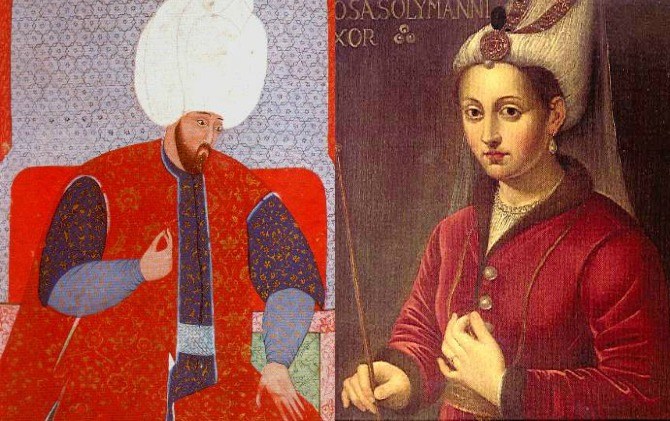 She regularly sent letters to the Sultan, in which, in addition to expressing her great love and longing for him, she also informed him of the situation in the capital and of any events that required his immediate attention or action.

She assisted Suleiman in state affair because as his sole legal wife, Hurrem was also concerned for her husband’s interest. She helped Suleiman keeping his political rival away from the throne. Because of her resilient willpower, she gained Suleimans trust more than any minister within the Ottoman government. Standing above the ministers in the time of Ottoman’s golden age, made her the most powerful woman in the world.

But of course, jealousy is of all times. The hostile harem created rumors about the deep intimacy between Hurrem and the Sultan. According to them, she used love potions or sorcery to delude Suleiman’s mind. Her reputation as a dark witch preceded her own presence outside the Ottoman territory, as the European society was once haunted by the fear of women with authority.

Nevertheless, her survival from an ordinary slave to reigning sultana was admired in Hurrem’s country of origin, Ukraine. Her story flourished! Facts and fiction collided and become a national pride for Rohatyn city.

Hurrem was famous for her stance toward the Kingdom of Poland, she congratulated the accession of Sigismund II Augustus that was well written in a letter. Her gentle policy to the Kingdom of Poland later laid the foundation for the Polish-Ottoman Alliance. She was also known for her generosity for the people of the Ottoman Sultanate. Among her first foundations were a mosque, two Koranic schools, a fountain, a public bath, and a women’s hospital near the women’s slave market (Avret Pazary) in Constantinople.

It is not like you heard Cinderella story in everyday live, right? They say that behind every powerful man, there’s a woman. And behind the powerful Suleiman, Hurrem stood proudly.