The architecture of the museum is also historically significant and has a design familiar within the African American culture.
aaa

Washington, DC. (September 23-25, 2016) The grand opening of the Smithsonian National Museum of African American History and Culture this past weekend was a 100-year project realized in a day of reflect upon a people’s struggle, a moment of celebration to rejoice in its significance and a time for families to come together and learn, remember and create new memories.

Back in 1915, African American Civil War veterans began a campaign to commemorate America’s Black experience. Little did they know that 101 years later an international event with people of all ethnic and social status backgrounds would stand together and welcome a museum that identifies, highlights and explains the 400 year experience of Americans of African descent.

The Museum founding director, Mr. Lonnie Bunch, and his committee organized a series of opening day events with historical significance that touched the heart and sensibilities of African Americans and defined the culture of this community at its ancestral core.

‘An act of patriotism’

The Saturday morning dedication ceremony was held just outside the museum’s front door and featured speeches by television, movie and music celebrities, civil rights leaders, former President Bush, who commissioned the building of the museum during his administration and President Barack Obama who wiped away a tear as he explained “By understanding this story, it binds us together and reaffirms we are all Americans.”

He continued by reminding the world that acknowledging African Americans in American history was “an act of patriotism to understand where we’ve been.”

The official opening was commemorated with the ringing of the “Freedom Bell” rang by President and Mrs. Obama and 99 year old Ruth Odom Bonner, the daughter of a slave of Mississippi who survived slavery, reconstruction and Jim Crowism to become a medical doctor. 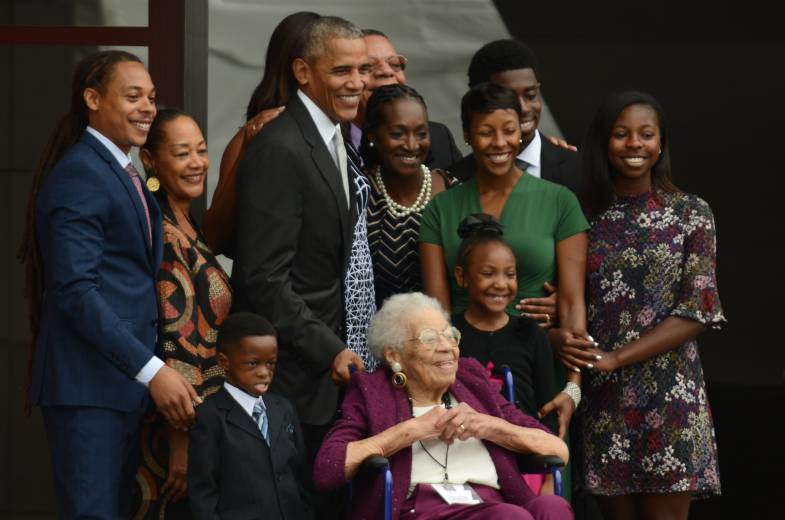 To officially open the museum, the President and the First Lady joined Ruth Bonner, the 99-year-old daughter of a man born a slave in Mississippi, to ring the Freedom Bell.

Ruth Bonner stood with four generations of her family that day which was the embodiment of the change and progress of the African American family and their lives. The “Freedom Bell” on loan from the First Baptist Church of Williamsburg is historically significant because the church was formed nearly 250 years ago by enslaved and free African Americans who met secretly to organize their own church.

The area around the museum was decorated with murals and huge posters of famous African American artists, entertainers and history makers as well as tents and stages for the literally thousands of people – students, senior citizens, politicians, celebrities and most importantly families gathered along the lawn and area around the Washington Memorial.

The evening concert on the mall featured both new and old hip hop, blues, soul and contemporary artists. Saturday evening included a black tie affair for the major donors and those who could afford a ticket and featured a rousing communal singing of “The Negro National Anthem”.

The architecture of the museum is also historically significant as explained on the museum’s webpage and has a design familiar within the African American culture and featured an architect from West Africa which is where a large percentage of African Americans descended from.

The items within the museum could only be toured through timed passes most of which had been distributed months prior. Interestingly, the thousands of people outside enjoyed the dedication ceremony even without being able to go inside. But for those able to enter, they were privy to a collection that holds nearly 37,000 artifacts of African American historical significance over hundreds of years. 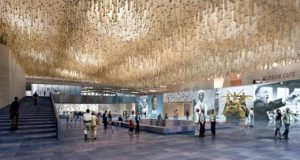 Some of the artifacts were heart wrenching and painful like the actual wrist watch of Harry T. Moore one of the founders of the NAACP – National Association for the Advancement of Colored People – who was bombed and murdered in 1951 as part of a hate crime or slave shackles from the 1800’s.

Other memorabilia stirred memories of early African American movies like the costume worn by Diana Ross, playing Billie Holiday in the famous movie “Lady Sings the Blues” or invited insight into the lives of history makers with photos of Harriet Tubman, the ‘conductor’ of the Underground Railroad and her husband Nelson Davis and their adopted daughter Gertie.

This is just the beginning

Three hundred years of relics and history have been quantified in this new museum, which is the 19th.

Smithsonian to be commissioned. African American people of all hues, backgrounds, religions and political leanings that make up the civilization and history of a people have a portion of their story told in this museum. However, this is just the beginning as its opening has sparked the response of hundreds of families who have items of historical significance and now have a way to preserve not only the history of their individual family, but the experience of their people as well.

At its core, the National Museum of African American History and Culture is a collection of artifacts from families – both from African and European descent whose culture, struggles, successes and challenges are the true American story.