The following is a Canadian Muslim mother’s take on 14 & Muslim, a one-hour documentary that has been recently produced by CBC to highlight the dilemma facing many Muslim kids in Canada.

Three Muslim teens are about to start high school in a Toronto Islamic school. The documentary presents two girls and a boy who are trying to decide their next step into the future. The boy wants to go to a public school to be better prepared for college and the real world.

The girls however, decide to continue in their school to stay within their comfort zone.  All three students were in the same Islamic school since kindergarten, which they believed sheltered them from Canadian society and rejection.

However, the school unexpectedly decides to close down, leaving the two girls compelled to go “school shopping.” Finally, they go to a Catholic school, which is a common choice for Muslim girls in Canada. Contrary to their beliefs, the girls felt accepted and welcomed once they joined their non Islamic school.

The film shows the Islamic school instilling fear in their students by constantly running red alert drills against terrorist attacks and by feeding them negative expectations of how non-Muslims may treat them.

At the end of the documentary, the teens’ mothers acknowledge that their children’s characters have  become stronger and fuller through their experiences after joining the non-Islamic school.

The priest in the Catholic school teaches children about acknowledging and accepting other religions as well as their own. In contrast, we see the Islamic school who is in continuous phobia  and is a closed culture separate from the Canadian society.

Of course, the real message of the documentary is clear, and it is not about Islamophobia.

My daughters are 20 and 18. The older is wearing the hijab while the younger is not. The younger was in a public high school, and this is her first year in University. Her school had more than 40% Muslim students with the majority of Muslim girls wearing the hijab. The school has an MSA and a prayer room for Muslims. 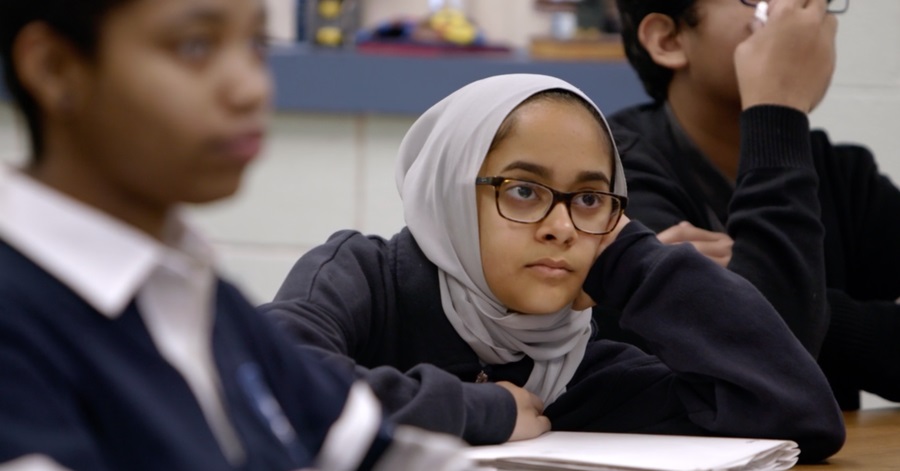 A few times, she had Canadian teachers occasionally make culturally un-informed comments that would hurt students of darker skin or new immigrants from developing countries. However, none of this seemed to make any difference to her most of the time.

It’s my 20-year-old daughter that I would like to share her point of view. She believes that racism and bigotry are present everywhere including our own Islamic and Arab world.

She says, her Muslim university colleagues make jokes about different nationalities within the Muslim community as well as ”white people”. She added that any signs of racism never hurt her and her Arab colleagues because they too reciprocate in their own way.

She and her colleagues believe that this doesn’t bother or stop them from asserting themselves.

She told me that Somali girls, mostly wearing hijab, (Somalis are the oldest, largest and most disadvantaged Muslim community in Ottawa), are the most extroverted group among Muslims in University and they have a large community of white friends.

My older daughter completely rejected the documentary. She believes it shows being a Muslim as a huge burden and that we should face Islamophobia by being assertive and not by succumbing to victimization.