The Quran and Sunnah as Guidelines

First of all, any question about Islam, particularly a question on what Allah Almighty will do to His servants in the Hereafter, can be answered only in the light of the Book of Allah (i.e the Noble Quran), and the teachings of His Prophet Muhammad. Those two are the foundations of the edifice of Islam.

Secondly, we should recognize the fact that Islam is a comprehensive way of life meant for humanity. Thus, any specific injunction or teaching in Islam should be understood in the whole context of Islam, and not in isolation.

For instance the Prophet has said:

“Anyone who said there is no god but Allah will enter Paradise.” (Tabarani narrated it from Abu Dharr in his Mu’jam al Kabir)

If we take this saying in isolation and understand it literally at the face value, the whole edifice of Islam would tumble down. Because, it would mean simply that it is unnecessary for us to do Salah, pay Zakah, fast during Ramadan, perform Hajj and do jihad in Allah Almighty’s way to enter Paradise. Rather we need just to say: “There is no god but Allah”!

There are several other ahadith of the Prophet that point to the conditions to be fulfilled along with a mere outward declaration: “There is no god but Allah”.

Besides,  while studying the manner in which the sayings of the Prophet are collected and recorded by the well-known hadith collectors, we understand that the same statement of the Prophet has been reported by several of his companions. Some giving a short narration, others with more details.

The Importance of Context

It is a well acknowledged norm in Hadith interpretation that the Sayings of the Prophet should be understood in context. Hence, where needed any particular saying should be supported and supplemented by other sayings, and most importantly by the Quran.

We should understand that the Quran and the Hadith complement each other. Therefore, to arrive at a correct understanding of a particular problem we need to consider other related verses and hadiths. One may note what the Quran says about the true believers:

{Only those are Believers who have believed in Allah and His Messenger, and have never since doubted, but have striven with their belongings and their persons in the Cause of Allah: Such are the sincere ones.} (Quran 49:15)

{Do you believe in part of the book and reject part of it? And what is the reward of those who do so save ignominy in the life of the world, and on the Day of Resurrection they will be consigned to the most grievous doom.} (Quran 2:85)

We should understand the saying of the Prophet in the whole context of the Quran. This, as well as the Prophet’s own Sunnah which in effect is a practical demonstration of the commandments of Allah in space and time.

Thus the above saying effectively means that anyone who says, “there is no god but Allah” will have necessarily understood its full implication and consequently will surrender his own will to the Will of Allah as expressed in the Quran and the Sunnah.

The Virtues of the Friday Prayer

Summarizing the virtues of the Friday Prayer, the Prophet is reported to have said the following:

“The five daily prayers, and from one Jumu’ah to the next, are an expiation for whatever sins come in between, so long as one does not commit any major sin.” (Muslim)

“The five daily (prescribed) Salah, and Friday (prayer) to the next Friday (prayer), and the fasting of Ramadan to the next Ramadan, is expiation of the sins committed in between them, so long as major sins are avoided.” (Muslim)

Our scholars have very clearly explained the meaning of the above sayings of the Prophet as follows: The expiation of sins from one Friday to the next is subject to all the conditions mentioned above being met, namely, cleaning oneself, putting on perfume, wearing one’s best clothes, walking in a calm and dignified manner, not stepping over people, not offending others, doing optional prayers, listening attentively and quietly to the khutbah and above all bringing a sincere heart committed to follow the commandments of Allah as well as the Example of the Prophet.

You have asked for an honest answer. Certainly in answering questions we in Aboutislam.net do not have any consideration other than clarifying the Islamic position on any question on the basis of the Holy Quran and the Prophet’s teachings as we have understood them as sincere Muslims.

In your question you have mentioned about the intention of the person concerned to pray the coming Friday prayer. Because he is a Muslim; is that right? Surely we do not expect a Non-believer to have such an intention.

But from your question we presume that his intention is not that of a sincere Muslim; because he doesn’t pray five times a day and breaks Allah’s commandment to eschew drinking. And obviously, for a person who does not do the five daily prayers there cannot be a valid Friday Prayer. Because, you know Friday Prayer is meant for Muslims and anyone who doesn’t pray five times a day cannot be considered a Muslim.

And remember what Allah Almighty warns us about hypocrites: 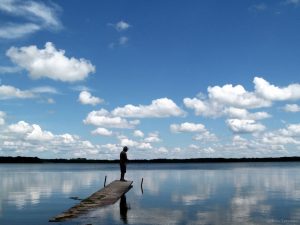 {And there are people who say, “We do believe in God and the Last Day,” the while they do not [really] believe. They would deceive God and those who believe – the while they deceive none but themselves, and perceive it not. In their hearts is disease, and so God lets their disease increase; and grievous suffering awaits them because of their persistent lying.} (Quran 2:8-10)

The above verses clearly show that there is a vast difference between what we outwardly proclaim and what we sincerely mean. The Prophet has also said:

“Allah does not look at your outward appearance and your wealth, rather He looks at your hearts and deeds.” (Muslim)

Hence, Allah’s forgiveness and reward depends on our sincerity and faith as well as the right intention.

After Jesus Returns, Will Repentance Still Be Accepted?

Does God Love Us All Unconditionally?