aaa
Q why do some veiled women choose to wear plain black and long hijab, while refusing to wear any jewelry or make-up? Isn’t this extreme?

With regards to your queries: No, it is not extreme and it is their right and choice that is respected.

For the most part, those who do that are trying to be as modest and God-conscious in their appearance as possible.

With regards to wearing black, narrated Umm Salamah (mother of the believers):

“When the verse “O Prophet, tell your wives and your daughters and the women of the believers to bring down over themselves [part] of their outer garments. That is more suitable that they will be known and not be abused. And ever is Allah Forgiving and Merciful.” (Quran 33:59), the women of Ansar came out as if they had crows over their heads by wearing outer garments.” [Sunan Abi Dawud]

This indicates that they wore black covers over themselves in an act of modesty and bashfulness, as this would help them conceal their shapes and beauty, and it is the least in attracting unwanted attention towards them.

So those who follow their example do so in an attempt to copy what was described as the most modest act of women who were highly God-conscious and observant of all religious duties in the best manner. “The Prophet [peace and blessing upon him] said: “He who copies any people is one of them.” [Sunan Abi Dawud]

Accordingly those who copy those women in their modesty and dress code wish to be one of them in terms of their level of sincerity, modesty and devotion.

Think on the other hand of copying trends set by fashion houses/designers who are not necessarily religiously-driven, God-conscious or care about the overall goodness of women, rather have other motives in portraying women in certain image (mostly sexualized and attractive to men), so is this the best example to follow, or the early women of Islam who were the most purified, modest and dignified role models?

This is not to say that wearing black is a must or obligatory on women. It is not. However, it needs to be highlighted that this is not also an extreme act. 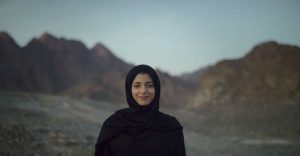 It is commendable and allowed for those who wish to do so with an intention of seeking purity, drawing closer to Allah [SWT] by giving up adornment in public and any kind of fitnah (distraction/temptation) to themselves or others. It is an act of mercy and hayaa’ (shyness/modesty), and the Messenger of Allah (peace be upon him) said:

“Al Hayaa’ does not bring anything except good.” “All of Al Hayaa’ is good.” “Al Hayaa’  is part of Iman (faith) [Al-Bukhari and Muslim].

With regards to makeup and jewelry, Allah Almighty says in the Quran that women shouldn’t “show off their adornment” to foreign men [al-Noor 24:31],this is also an act of modesty enacted lest women be abused or objectified in any way, which is sadly what we see around us in many cases.

This adornment extends to excessive makeup and jewelry that draw unnecessary and/or harmful attention to the woman.

And with regards to perfume, the Messenger of Allah (peace and blessings upon him) said:

“Any woman who puts on perfume then passes by people so that they can smell her fragrance, is an adulteress.” [Sunan an-Nasa’i]

‘Adulteress’ here is not used in the literal sense, but it shows that a woman who is doing an act that leads to alluring a man or making herself desirable to a man who is not her husband is a major mischief that leads to corruption among people and in the society. This especially happens when it creates impure temptations.

The point in all of that is that women are supposed to adorn themselves fully in the right time and place, i.e. with their husbands. Revealing one’s beauty for the spouse is an act that increases the love, bonding, intimacy between the two of them, and it is something special between the two of them that is not shared with everyone in public.

Increasing the love and bonding in the household through these acts strengthens the family and, subsequently, the society since the family is the foundation of a strong society.

But beautifying one’s self to foreign men, on the other hand, brings -among many things-, jealousy, harassment sometimes or unwanted attention/word/look/any type of harm.It can also destroy families when unmarried people are attracted to one another.

The purpose from observing modesty in wear in public is that men and women ought to aid (not distract) one another for the greater good of their societies, not its corruption. It’s not merciful to distract others or tempt them.

There is no need, for example, for the woman to excessively adorn and beautify herself at workplace or school…etc., thus causing distraction and/or drawing the attention to her beauty rather than her brain and intellect.

Today, we can observe the objectification of women and abuse of their bodies and beauty to allure audiences and sell products all around us, which is what seems rather extreme and derogatory to women and their honor, intellect and dignity.

Women are much nobler than being sexualized, objectified and/or used as marketing tools.

That is why you’ll find that many women choose to be in control of their own bodies by covering it and reserving the right of choosing what to wear, rather than follow trends that change every season and are dictated by certain people, and many feel pressured to follow in order to fit in or enhance self-worth.

“He created the heavens and earth in truth and formed you and perfected your forms; and to Him is the [final] destination.” (Quran 64:3)

The One who created the Beautiful Mighty Heavens says that we’re already created beautiful and perfect. So a woman shouldn’t feel pressured or feel that she needs makeup and jewelry to be beautiful in people’s eyes, respected or have self-worth.

The commands in Islam in essence are a form of liberation to women and recognition that -in their natural form-they’re beautiful enough, worthy and perfect.

The society should respect that; what they need from women is their intellect, hard work, mercy and benefit, and not any form of pressure or abuse.

Women’s full beauty are meant to be enjoyed within the settings mentioned in the Quranic verses. Those are the settings where the woman is with those who are meant to love, cherish and honor her, not objectify or exploit her. 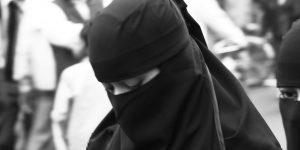 This might sound difficult since women love beautifying themselves. But, again, they’re not required to give up beauty altogether, but rather discipline when and where it is displayed. It is a means of self-purification and having a higher goal and purpose.

So, those who are doing what you mentioned in the question, dear questioner, are trying to follow the most modest route, even if certain things are not required from them, but it is their attempt to do the best they can in showing mercy, modesty, faith and devotion.

Why Are Women Ordered to Wear Hijab While Men Aren’t?

My Little Sister Is Wearing Black and Nothing Else!