Father spent Laylatul Qadr (the Night of Power or Honor) with his eldest son at Masjid Al Jami. His wife left a voicemail message on his phone; “I have an appointment at Samir’s new school with the Director of Vision Services. I completed my courses in Braille Transcription and the tests for Exceptional Student Education (ESE) Certification. My application for transfer was approved!”

On the 30th day of Ramadan,  instead of getting dressed like usual, Samir was bouncing around and playing. He was asking more and more questions: “When can I go to school with Leila? Can I carry a backpack?  What time will you wake me up? Will I learn to read?” Can I help open the box?  Do you know what’s in it?

“Samir please get dressed now,” his Mother said. “I must get ready to go.”

After the early morning Eid prayer, at home, Father brought the Part 1 into the family room.  He put the keys in Samir’s hand. Watching him struggle to get the key into the lock, his Father guided his hand. They felt the box open. Samir was so excited, he tugged at the paper, touching everything around it. He couldn’t describe what it felt like, so he asked, “What is it?” His Mother told him, “It’s called a Braille Translator.”

She explained ”Braille is a tactile alphabet writing system for blind people.  It translates or converts letters and numbers to Braille. It’s a way for you to use your fingers to read books. I want you all to know, I‘ve been studying to learn how to teach Braille writing. I have a new job, working with children who are blind and have vision impairments at Samir’s new school.” Mother held Samir in her arms, she kissed his face and whispered in his ear, “Now I can be your teacher!”

Inside the box they found pages of the Holy Qur’an translated to Braille, (the first Juz, one of thirty parts of the Holy Qur’an).  Samir’s Mother guided Samir’s hands across the lines on each page as she recited Surah Al Fatiha, the Opening Surah.  Then, the parents recalled the story of Samir’s birth:

Samir was not born blind.  When he was a baby the Pediatrician saw a bright white glow in his eyes that meant something was wrong. The glowing white spot completely covered one of his eyes. After many different examinations and tests the doctor told us the spots were tumors. The tumors were growing very fast, every day they grew bigger and needed to be removed right away. 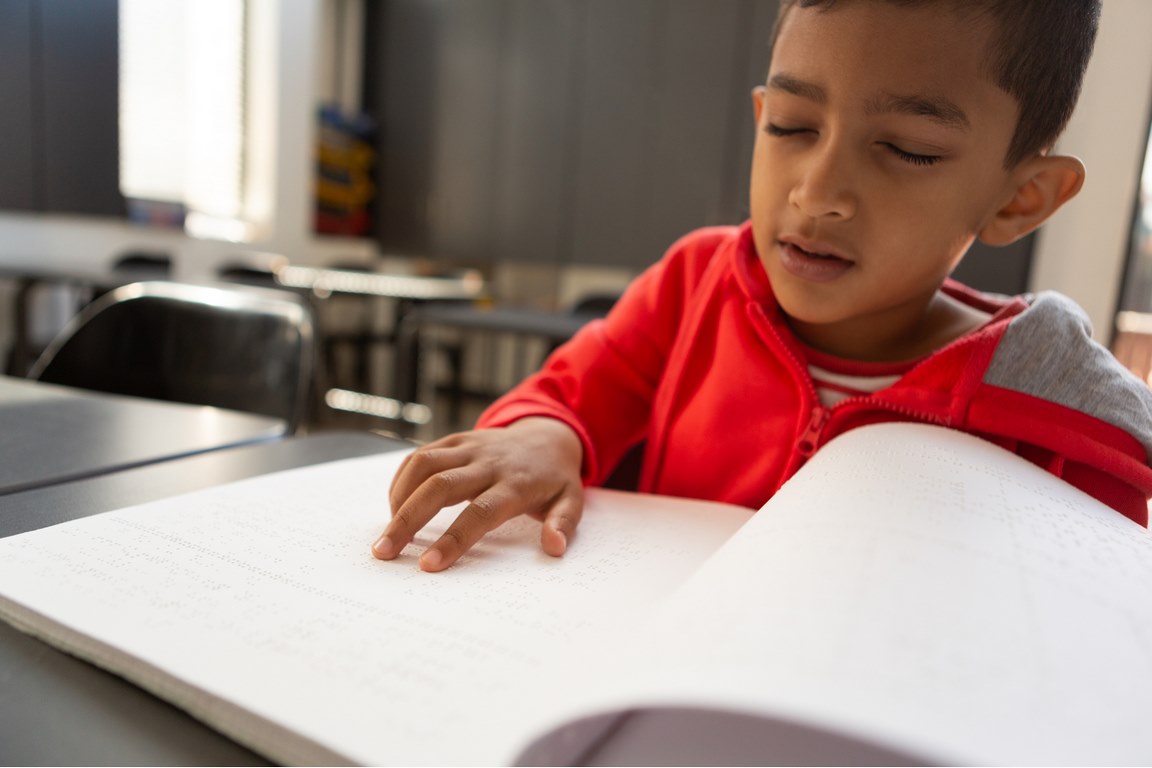 After the operation, Samir could only see with one eye. The other eye had smaller tumors that were treated. The diagnosis was a rare childhood eye cancer.  His parents were told if he survives Retinoblastoma (Rb), he will be at risk for blindness when he gets older. Alhamdulilah, he survived and grew up to be healthy, happy and so smart.

Late, Father’s business agreed to contribute funds needed to pay the salary of a second Special Education Teacher, to teach Braille Translation and American Sign Language (ASL) after school for all ages.

The school audiologist said, Samir’s hearing test, showed he needed to be fitted for hearing aids. Samir became the first ESE student to graduate from an Islamic Academy with honors in ASL and Braille. His Mother was the first Muslim to teach Deaf-Blind students, grades kindergarten through third, in the state and became principal of the new charter school.

Blog with us! Talk about your unique challenges, hopes and concerns. We encourage you to share your voices and points of view from diverse backgrounds and across the globe, so that we may all benefit from better knowing each other. Please submit your blog posts here.