Moroccan astronomers have been involved in the recent discovery of a system of seven earth-sized planets orbiting a single star. Three of these planets are located within the star’s habitable zone. This is the largest number of planets found to-date in the habitable zone of a star outside our solar system.

The planetary system was named TRAPPIST-1 (Transiting Planets and Planetesimals Small Telescope), after the Belgian telescope TRAPPIST-South located in Chile, which was responsible for the initial discovery of three of the planets in the system. The project’s counterpart, TRAPPIST-North, is located in the Atlas Mountains in Morocco. NASA’s Spitzer Space Telescope, assisted by other ground-based telescopes, later confirmed the existence of two of the three planets and discovered five additional ones.

All of the seven planets in TRAPPIST-1 have the potential to contain liquid water, the prime source for life as we know it, on their surfaces. This means that further exploration of the planetary system could reveal suitable conditions for life.

Among the researchers contributing to the discovery are Ben Khaldoun Zouhair and his student Khalid Barkaoui from Morocco, in addition to Yaseen Almleaky, an associate professor at King Abdulaziz University in Jeddah, Saudi Arabia.

Zouhair, head of astrophysics at Cadi Ayyad University in Marrakech, told Ozy.com that the Moroccan-based telescope at the Oukaïmeden Observatory and Barkaoui’s data analyses revealed crucial details about three of the seven planets, including their radii, temperatures, orbiting periods, masses and densities. This information is essential to support the conclusion that they have the potential to harbor life.

Barkaoui is a 25-year-old doctoral student at Cadi Ayyad University. He is completing a one-year study program at the University of Liège in Belgium.

Barkaoui’s experience in the field of exoplanetary systems began while doing his master’s degree at Cadi Ayyad University on an ‘exoplanet’, a planet orbiting a star outside our solar system, named WASP-19b.

“During my master’s degree, I developed a code in the Python programing language that allowed me to accurately detect a transit of an exoplanet. I used the transit’s observation in measuring the flux of its mother star,” Barkaoui tells AboutIslam. 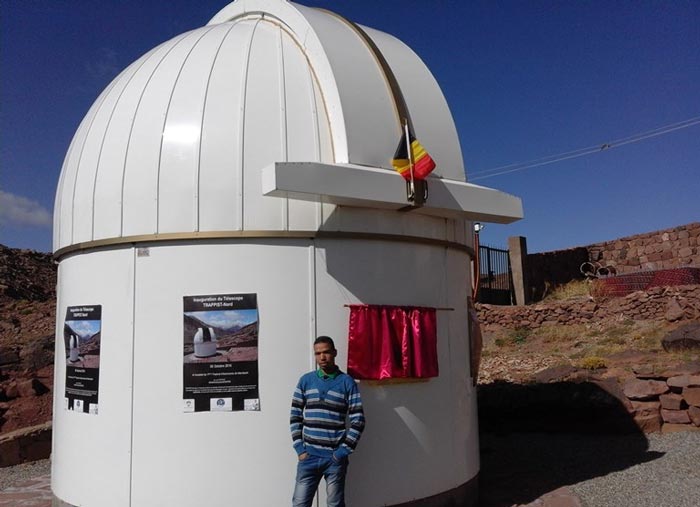 After finishing his master’s degree, Barkaoui was chosen to work at the TRAPPIST-South Observatory in Chile under the supervision of Zouhair and Michael Gillon from the University of Liège in Belgium.

In 2016, the new TRAPPIST-North telescope was installed in Morocco by the University of Liege. Barkaoui then returned to Morocco to continue working on the project using the northern telescope.

“Oukaïmeden was a perfect choice for the TRAPPIST project because of its excellent atmospheric conditions and its location, which lies at around 3,000 meters above sea level,” he says.

Its location in the Northern Hemisphere makes TRAPPIST-North more suitable than its southern counterpart for deep-space observations because it faces away from the center of our Milky Way galaxy. This prevents the view of the deep space beyond the Milky Way from being blinded by the galaxy’s extremely bright bulge.

On the other hand, because the Southern Hemisphere’s water-dominated geography of relatively less air and light pollutions and because it’s facing the galaxy’s center, an observer can see the bulge’s far more visible and brighter near-sky stars.

Professor Gillon, who led the discovery, told Ozy.com that the Moroccan team’s contribution in characterizing the TRAPPIST-1 system was important, and he is optimistic about Barkaoui’s future as an astrophysicist.

Barkaoui is currently involved in a new study led by Gillon called Speculoos, which is searching for more terrestrial planets transiting nearby ultracool stars.

“I plan, with colleagues, to develop the field of astronomy in Moroccan universities and to provide opportunities to all students interested in astronomical and space sciences,” Barkaoui tells AboutIslam.

“I feel extremely optimistic, because nowadays there are several amateur astronomical societies that work in Morocco. They have even expanded to cooperate with other North African amateur astronomical organizations, like Sirius Astronomy Association in Algeria and the Astronomical Society of Mahmoud Mosque (ASMM) in Giza, Egypt,” he says.