After Charles Darwin published his book The Origin of Species in 1859, evolutionists set out to search for an intermediate “transitional” species to verify his claims.The theory of evolution’s fundamental claim is that all living things are descended from one another. A living organism that previously came into existence in a random manner gradually turned into another, with all ensuing species coming into being ï؟½ or evolving ï؟½ that same way. This transition gradually took place over hundreds of billions of years, and so unearthed fossils of prehistoric creatures should hold ample evidence of this process.

Among the most prominently cited examples in support of the existence of transitional forms is the Archaeopteryx fossil. This particular fossil species is indispensably important to Darwinists, not so much because it constitutes evidence for their imaginary process of evolution, but because it is so easy to speculate about.

The first Archaeopteryx fossil was found in the Solnhofen Limestone Formation in Bavaria, Germany, in 1861. Darwinians regarded it as a savior that would substantiate their theory. The engraved skeleton of Archaeopteryx (which means “ancient wing” in ancient Greek) was such an incredibly rare and highly valuable fossil at the time that it was placed in a bank vault for protection.

With great excitement, Darwinians portrayed the fossil as an intermediate “missing link” between reptiles and birds. Archaeopteryxtook pride of place in many museum exhibitions and textbooks as definitive proof of evolution. 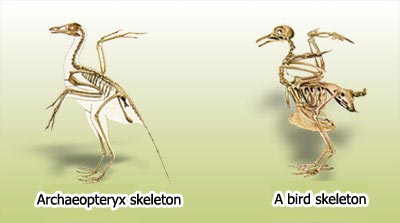 Archaeopteryx (left) has a great many features in common with present-day birds (right). Features such as a toothed jaw and claws merely show that it is a different species of bird.

A number of features peculiar to Archaeopteryx led to evolutionists interpreting it as a snapshot of the so-called evolutionary transition between reptiles and birds. They suggested that this fossil of a 150-million-year-old extinct bird bore the half-reptilian characteristics of a species that had lived long before birds. Archaeopteryx appeared to have feathered claws on its wings, teeth in its jaw, and a reptile-like bony tail ï؟½characteristics that led to its being interpreted as proof of the theory of evolution.

According to that theory, certain small dinosaurs called Velociraptors or Dromaeosaurs had gradually developed their forelegs into wings and gradually became able to fly by leaping onto their prey from high branches. As a part of this scenario, Archaeopteryx was the first species to branch off from its alleged dinosaur forerunners and begin to fly. This hypothesis can be found repeated in just about every evolutionist publication.

The latest examinations of Archaeopteryx fossils, however, have shown that this creature was definitely not an transitional form. It is merely an extinct species of birds with several features that are somewhat different from those of modern-day birds.

Scientists today agree that Archaeopteryx possessed a skeleton, feather structure, and flight muscles identical to those of present-day birds. In addition, scientific examination has proven that with its breastbone and asymmetric feather structure,Archaeopteryx was a fully fledged flying bird. (Nature, August 1996, and Dunbar)

“It is easy enough to make up stories of how one form gave rise to another .. but such stories are not a part of science, for there is no way of putting them to the test.”

Alan Feduccia of the University of North Carolina at Chapel Hill, who is regarded as a world authority on birds, pointed out the erroneous nature of the evolutionist claims for Archaeopteryx when he said,

Paleontologists have tried to turn Archaeopteryx into an earth-bounded, feathered dinosaur. But it’s not. It is a bird, a perching bird. And no amount of ‘paleobabble’ is going to change that. (Morell)

Despite being an evolutionist, the Yale University professor of geology John H. Ostrom agreed that these claims are lacking in proof:

Zdenek Burian re-organized pre-Archaeopteryx step in the evolution of bird flight which is usually named pro-avis. There is no fossil evidence of pro-avis at all. (Ostrom)

Colin Patterson, another evolutionist scientist, also said that the claims made for Archaeopteryx are far from being scientific:

Is Archopteryx the ancestor of all birds? Perhaps yes, perhaps no: there is no way of answering the question. It is easy enough to make up stories of how one form gave rise to another, and to find reasons why the stages should be favoured by natural selection. But such stories are not a part of science, for there is no way of putting them to the test. (Patterson)

Why Not a Transitional Form? 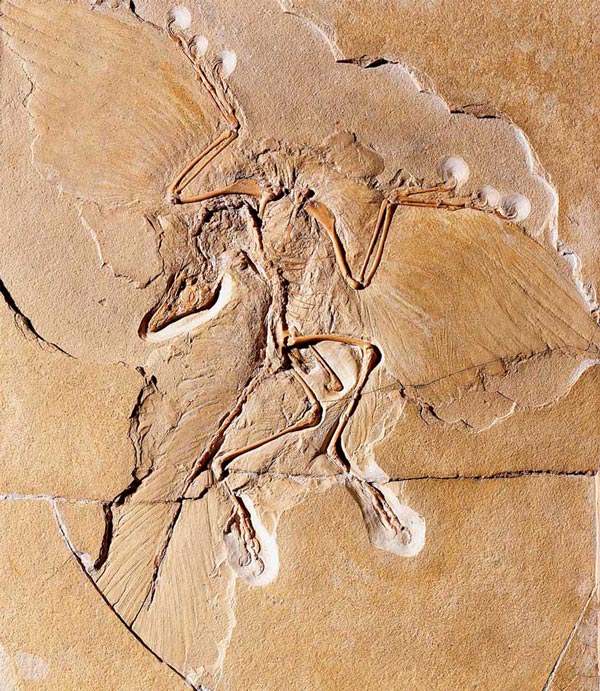 The mere fact that Archaeopteryx possesses a number of unique features does not demonstrate that it is any sort of “transitional form.” The evidence that it is not an intermediate half-dinosaur, half-bird but merely an extinct species of bird can be briefly detailed as follows:

Archaeopteryx’s Wishbone. Dinosaurs possess no furcula, or wishbone, although Archaeopteryx, like all birds, possesses one. Located in front of the ribcage to which the muscles necessary for flight are attached, this breastbone can be found in all present-day birds, flying or flightless, in addition to bats.

Anatomist David Menton refers to Archaeopteryx‘s wishbone in these terms:

Archaeopteryx has a robust wishbone. Some recent fascinating studies using moving X-rays of birds as they fly show how the shoulder girdle has to be flexible to cope with the incredible forces of the power-stroke in flight. You can actually see the wishbone flex with each wing-beat. (Menton)

Until the 1990s, that Archaeopteryx fossils lacked a furcula was presented as the most important evidence that it could not fly. However, the seventh Archaeopteryxfossil, discovered in 1992, showed that this assertion was incorrect. The discovery that this fossil did contain a furcula completely undermined the most basic foundation of the claims that Archaeopteryx was a flightless half-bird.

Because of its feathers, [Archaeopteryx is] distinctly to be classed as a bird. (Dunbar)

Alan Feduccia also pointed to the asymmetric structure in the creature’s feathers in stating that Archaeopteryx was a bird capable of flight:

The significance of asymmetrical features is that they indicate the capability of flying; nonflying birds such as the ostrich and the emu have symmetrical [feathered] wings. (Olson)

The shape and general proportions of Archaeopteryx‘s wings are identical to those of modern-day birds. The fact that the wing structure possessed by Archaeopteryxhas been maintained down to the present day for 150 million years (since the Jurassic period) shows that its wings were created for flight. Those who say thatArchaeopteryx was not able to fly cannot account for that asymmetric structure. (Feduccia)

The Claws on Archaeopteryx’s Wings. Evolutionists point to the claws on Archaeopteryx‘s wings as evidence that it evolved from dinosaurs and that the animal is a transitional species. However, this feature in no way suggests any relationship between this creature and reptiles.

Indeed, two living species of bird ï؟½Touraco corythaix and Opisthocomus hoazin ï؟½ each have claws that serve to cling onto branches. These creatures are fully-fledged birds, with no reptilian characteristics. These modern-day examples invalidate the claim that the claws on the Archaeopteryx wings mean that it must be an transitional form.

“Studies have revealed that some of the ‘similarities’ suggested between Archaeopteryx and dinosaurs are entirely the result of misinterpretation.” 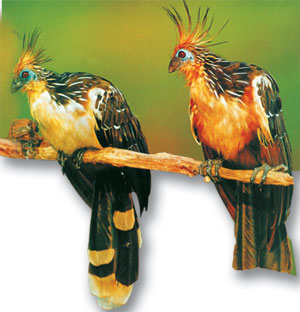 The Teeth in Archaeopteryx’s Jaw. When evolutionist biologists depict Archaeopteryx as an transitional form, one of the main features they rely on is its teeth. This feature, however, actually proves no relationship between this creature and reptiles. Evolutionists are mistaken when they suggest that these teeth are a reptilian feature simply because teeth are not an exclusively reptilian characteristic.

Some modern-day reptiles have teeth, but others do not. Even more importantly, extinct species of toothed birds are not limited to Archaeopteryx. The fossil record contains a separate group that we may describe as “toothed birds” that lived both at the same time as Archaeopteryx and afterwards ï؟½ and indeed, until fairly recent times.

One very important fact, often ignored, is that the dental structure of Archaeopteryx and other toothed birds is very different from that of dinosaurs. According to measurements carried by such well-known ornithologists as L. D. Martin, J. D. Stewart, and K. N. Whetstone, the surfaces of the teeth in Archaeopteryx and other toothed birds are flat, and they have broad roots. Yet the surfaces of teeth of the theropod dinosaurs, which are alleged to be the forerunners of these birds, are serrated like saws, and their roots are narrow. (Martin, 1980) Studies by such anatomists as S. Tarsitano, M. K. Hecht, and A. D. Walker have revealed that some of the “similarities” suggested between Archaeopteryx and dinosaurs are entirely the result of misinterpretation. (Tarsitano)

Archaeopteryx’s Quadrate. Refuting the claim that Archaeopteryx‘s quadrate (the bone with which the jaw articulates) resembles that of dinosaurs, Haubitz and others used computed tomography to reveal that its quadrate is in fact identical to those of modern-day birds. (Haubitz)

The jaw’s movement is another important piece of evidence that undermines evolutionist claims. In the majority of vertebrates, including reptiles, only the lower jaw is mobile; in birds, however, including Archaeopteryx, the upper jaw also moves.

Archaeopteryx’s Digits. Another blow to the evolutionist thesis concerning Archaeopteryx comes from its digits. It has been discovered that the embryonic development of the forearm bones is completely different in birds than in theropod dinosaurs.

Theropod dinosaurs’ forearms or “hands” consist of digits I, II, and III, while the wings of birds consist of digits II, III, and IV. This important evidence, distinguishing dinosaurs from birds, was noted in a 1997 article in Science magazine. (Hinchliffe)

In addition, ornithologists L. D. Martin, J. D. Stewart, and K. N. Whetstone compared the ankle bones of Archaeopteryx and dinosaurs and revealed that there was no similarity between them. (Martin, 1980 and 1991)

Archaeopteryx’s Skeletal Structure. Interpretations to the effect that Archaeopteryx‘s pubis pointed downward ï؟½ allegedly a position in transition from that of dinosaurs, which points forward ï؟½ are not confirmed by scientific findings. A. D. Walker has stated that conjectures along these lines are false and that, like that of birds, Archaeopteryx‘s pubis pointed backward. (Walker)
In short, avian “evolution” is not a thesis consistent with biological or paleontological evidence, but only a fictitious, unrealistic claim stemming from Darwinist preconceptions. The subject of avian evolution, which some experts prefer to speak of as if it were scientific fact, is a myth kept alive for ideological reasons.

The truth revealed by science is that the flawless creation in birds is the work of an infinite wisdom, in other words, both Archaeopteryx and all species of birds were created by Almighty God.

(Harun Yahya books can be bought at bookglobal.net.)