Islam lays great emphasis on work. In many places in the Quran it is made clear that time should not be wasted.

In the Quran, God draws attention to all the magnificent creations as an indication of the proper planning that leads to wonderful results—for Muslims believe that He creates nothing haphazardly.

God relates in the Quran how the heavens and the earth were created in seven days and describes that as a sign for humankind. Then the Quran directs a message to humanity that it should contribute positively to the earth, that is, it should work to make use of what is created for its benefit:

That man can have nothing but what he strives for; That the fruit of his striving will soon come in sight: Then will he be rewarded with a reward complete. (53:39-41)

In Islam work is given special importance to the extent that it is considered as an act of worship in itself. Although some people believe that they are not obliged to work because they dedicate themselves to worshiping God, this is actually a wrong perception of the concept of worship.

Scholar Imam Al Ghazali mentioned in his book Ihyaa Ulumudd-een (Revival of the Religious Sciences) that Jesus (peace be upon him) once saw a man who had completely devoted himself to worship. When he asked him how he got his daily bread, the man replied that his brother, who worked, provided him with food. Jesus then told him:

“That brother of yours is more religious than you are” (The Book of Provision, Chapter 1). 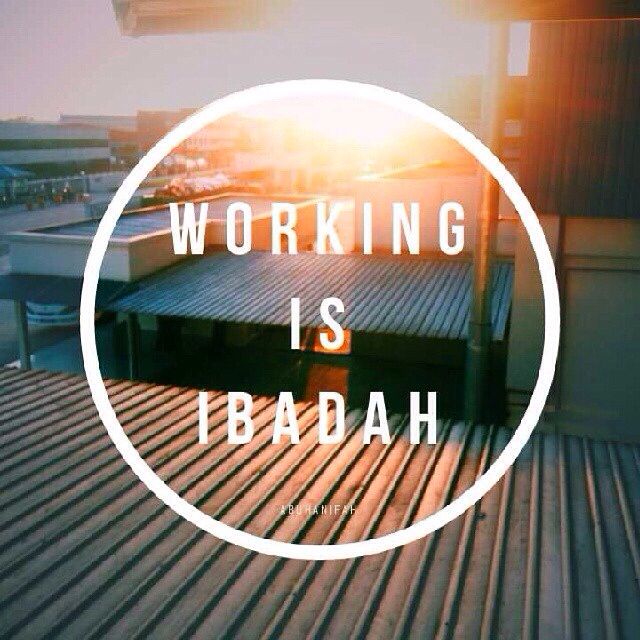 Al Ghazali also mentions the Prophet’s Companion Umar ibn Al Khattab, who used to stress this point further by telling people, “Never should anyone of you think that dua’ (supplication) for sustenance without work will avail him, for heaven never rains gold nor silver” (The Book of Provision, Chapter 1).

Therefore, Islam is a religion of worshiping the Creator, with an essential part of that worship being working for survival. God tells us in the Quran to traverse the universe and make use of all the abundant resources that have been created for us.

Islam is a religion that orders its followers to be part and parcel of a working and productive society. The Quran says what means:

The Prophet Muhammad (peace be upon him) himself, who is considered a paragon of virtues in Islam, used to pray seeking God’s refuge from laziness or idleness. Even before he was chosen as a messenger of God, he was a hardworking person. This earned him the respect of his employer, Khadijah, who later proposed marriage to him because of all the merits and virtues she saw in him.

In his instructions to Muslims on this aspect, the Prophet Muhammad strikes a balance between worship and work. So, as Muslims have to be constant in their acts of worship, they also have to work hard to make a living, as it is recorded in one of the famous sayings of scholars:

“Work hard (for making a living and survival) as if you are going to die” (Al Albani, Series of Weak and Fabricated Hadiths). Also, in exhorting Muslims on the importance of work, the Prophet Muhammad made it clear that getting one’s sustenance from one’s work is one of the praiseworthy acts of worship.

It is recorded in his traditions how he turned a man who came to him begging into a productive member of the society by teaching him how to work and provide for himself.

One of the scholars of Islam, Imam Hasan Al Basri, was asked one day the secret behind his asceticism. The imam mentioned four things in reply:

“One, I believe that my sustenance will never be hijacked by anybody (so I work to attain it).

Two, I know that a work that is mine must be performed by me, so I do not decrease my efforts in performing it.

Three, I believe that my Lord is Omnipresent (watching me), so I do not like Him seeing me committing sins.

Four, I know that death is somewhere waiting for me, so I prepare for it (through good deeds).”

In this way, Islam lays down a practical framework for life by making these principles and guidance. Islam strives to eradicate social ills and vices that result from unemployment, idleness, and poverty, by instructing the youth to rise up to the challenge of shouldering responsibility at an early age, and also for the old not to give up their efforts in benefiting the society with their experience and working skills.

Thus, the true message of Islam is not just for a Muslim to profess faith and do nothing for his or her society. Rather, Islam teaches that the true faith is what is demonstrated through sincere deeds that make a noticeable addition to the progress of society.