We all know about the sink holes and how it’s due to the difference in air pressure between inside and outside the hole, it can sack anything that can pass nearby or over it.
aaa

On Fujita scale, there are the following types of Hurricanes: 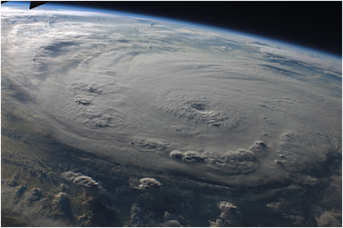 1- Storm that can “Break everything”

Or are ye secure that he will not send you back therein another time and then send upon you a gale of wind (Kaasefan) and drown you for your having disbelieved, so that therein you will not find for yourselves against Us an avenger? (17:69)

The word “Kaasefan” mean that break everything as shown below, especially of wood, like trees, wooden house and stores:

This can be referred to Hurricanes of 2nd and 3rd degree, as shown in next image too: 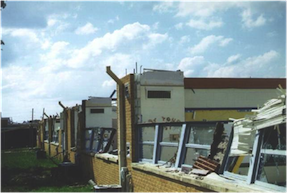 2- Storms that can destroy everything, as in the next verse:

Then, when they saw it as a dense cloud coming towards their valleys, they said: “This is a cloud bringing us rain!” Nay, but it is that (torment) which you were asking to be hastened — a wind wherein is a painful torment! (24)

Destroying everything by the Command of its Lord! So they became such that nothing could be seen except their dwellings! Thus do We recompense the people who are Mujrimun (polytheists, disbelievers, sinners)! (46:24-25)

This is equivalent to Hurricanes of 4th and 5th degree, as shown in the next image: 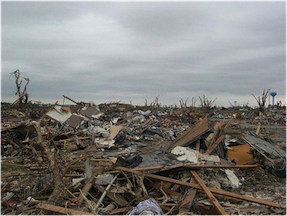 A fire whirl, colloquially fire devil or fire tornado, is a rarely captured phenomenon in which a fire, under certain conditions (depending on air temperature and currents), acquires a vertical vorticity and forms a whirl, or a tornado-like vertically oriented rotating column of air. Fire whirls may be whirlwinds separated from the flames, either within the burn area or outside it, or a vortex of flame, itself.

Although, it’s a rare phenomenon and maybe never seen in Arabia, but it was mentioned in Quran, because Allah knows everything:

Would any of you like to have a garden of palm-trees and vines, with rivers flowing underneath it, with all kinds of fruit for him therein; and old age hath stricken him and he hath feeble offspring; and a fiery hurricane strikes it and it is (all) consumed by fire. Thus Allah maketh plain His revelations unto you, in order that ye may give thought. (Quran 2:266) 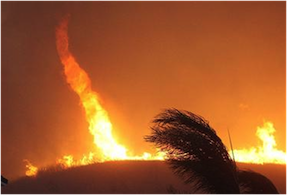 Other Type of Storms:

A dust / sand storm is a meteorological phenomenon common in arid and semi-arid regions. Dust storms arise when a gust front or other strong wind blows loose sand and dust from a dry surface.

Particles are transported by saltation and suspension, causing soil erosion from one place and deposition in another. The Sahara and drylands around the Arabian peninsula are the main terrestrial sources of airborne dust, with some contributions from Iran, Pakistan and India into the Arabian Sea, and China’s significant storms deposit dust in the Pacific.

This kind of storms that are special to carry dust, although they are known in Arabia, but it’s mentioned how God sends them as torment, that people may remember and fear their Lord:

And if We sent a wind and they beheld it yellow, they verily would still continue in their disbelief. (30:51)

So We sent against them a furious Wind through days of disaster (Nahaseat), that We might give them a taste of a Penalty of humiliation in this Life; but the Penalty of the Hereafter will be more humiliating still: and they will find no help. (41:16)

The Word [Nahaseat] that can be explained as unfortunate days or days of disaster, but also it means “Dusty storms”.

Dusty storms are very serious problem especially on navigation and flights and cause too much traffic accidents and health problems for all populated areas that area affected by them. 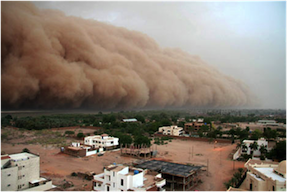 We all know about the sink holes and how it’s due to the difference in air pressure between inside and outside the hole, it can sack anything that can pass nearby or over it.