“O Turner of hearts, make my heart firm upon Your religion.”
aaa

The problem of relapsing in faith, whether due to weak commitment or ideological reasons, is a phenomenon that has existed throughout time in all faiths and traditions. Sadly, this is also a reality for Muslims as well.

Hence, we find in the Quran a number of places where Allah Almighty warns the believers from falling into such circumstances:

{And of the people is he who worships Allah on an edge. If he is touched by good, he is reassured by it; but if he is struck by trial, he turns on his face (to the other direction). He has lost (this) world and the Hereafter. That is what is the manifest loss.} (22:11)
{Indeed, those who reverted back (to disbelief) after guidance had become clear to them — Satan enticed them and prolonged hope for them.} (47:25)

The Prophet (peace be upon him) taught his ummah a supplication which highlights the reality of this matter:

“O Turner of hearts, make my heart firm upon Your religion.”

The companions then said:

“O Messenger of Allah Almighty, we have believed in you and that which you came with, so do you still fear for us?”

He (peace be upon him) replied:

“Yes, indeed the hearts are between the two fingers of Allah, He turns them whichever way he wills.” (Ahmad)

The unfortunate reality that we find ourselves in is that many among the ‘practicing’ community often feel safe with their state of religion and feel secured that misguidance will never approach and overwhelm them.

This is a very dangerous situation to be in since it indicates that the person relies solely on his own abilities and competence to remain upon guidance whereas in reality it lies in the hands of Allah Almighty.

It is for this reason the Prophet (peace be upon him) used to also make the supplication:

Al-Tirmidhi explained the phrase to mean:

“to return from iman to kufr, or from obedience to sin, or it generally means to return back to something evil.” (Tirmidhi, 3439) 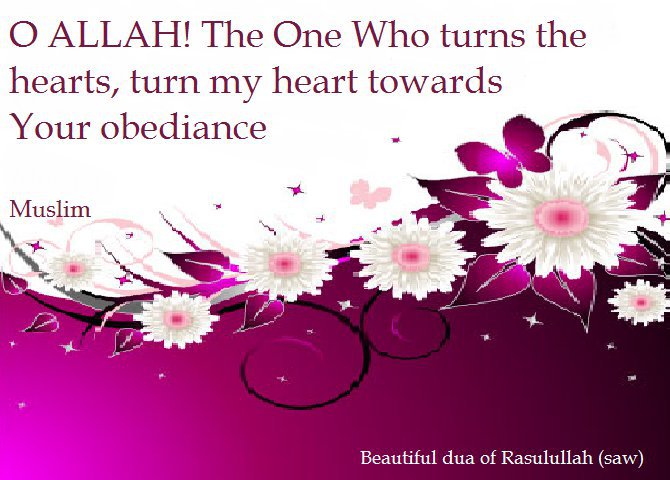 “The people of deep insight do not feel safe from five matters:
1. How his Lord will take him to account for a sin he had committed in the past;
2. His remaining life and what potentially lies ahead of him of matters that can destroy his religion;
3. Grace and provisions that Allah Almighty gave him and not knowing whether it is a means for it to lead him, step by step, to his ruin;
4. Misguidance that has been adorned to him and so he sees it as guidance;
5. The gradual deviation of the heart until it deviates faster than the blinking of the eye such that he could lose his religion without even realizing.” (Shu’ab Al-Iman of Al-Bayhaqi)

Allah Almighty even informed us of the fact that the Prophet (peace be upon him) was in need of divine assistance to keep his faith steadfast:

{And if We had not strengthened you, you would have almost inclined to them a little. Then (if you had), We would have made you taste double (punishment in) life and double (after) death. Then you would not find for yourself against Us a helper.} (Quran 17:74-75)

Sheikh Ibn Baaz was once asked about a person who was known for steadfastness and piety but then suddenly changed his ways and became distant from the religion.

It is because of this that a person should never feel complacent with his level of steadfastness and adherence to the religion since a person can lose both in a sudden short period of time by the will of Allah Almighty.

This does not mean though that a person is like a feather that blows away in the wind such that it has no say in what direction it is blown.

In fact, Allah Almighty guides people based upon his infinite knowledge of the state of the person and how they were worthy of guidance. He is also aware of the hidden depths of our hearts and what they contain and therefore can prevent guidance from reaching a person’s heart due to the sickness it contains and due to the sins that tarnished the heart.
This is reinforced by the Hadith of the Prophet (peace be upon him):

The scholars noted though that this sudden change does not occur suddenly without any influence from the person himself. Ibn Rajab said commentating upon the version of the Hadith that mentions ‘according to what people see…’:

Likewise, it could be that a person does the actions of the people of Hellfire yet in his heart he has a hidden righteous trait which could become very apparent toward the end of his life and therefore dies upon righteousness.” (Jami Al-Ulum wal-Hikam, 1:172-3)

“O my Lord, you already know who will inhabit Paradise and who will inhabit the Hellfire, so which abode will I reside in?”
Also, Sufyan Al-Thawri once said to a gathering of righteous people:

“Has the knowledge of Allah Almighty about you ever made you cry?”

A person responded by saying:

“Because of what you have said, I do not think I can ever be happy again.” Sufyan was also found on many occasions crying and saying:

“I fear that my name is written in the Sacred Tablet to be among the disgraced! I fear that faith will be taken away from me at the time of death!” (Jami Al-Ulum wal-Hikam, 1:173)
Al-Hasan Al-Basri said:

“No one fears hypocrisy except a believer and no one feels safe from it except a hypocrite himself.”