A few weeks after taking shahadah, new Muslims can start to feel overwhelmed and worried.

There is so much information, so much to consider, so many things to learn and do.

It may not be as easy as it seemed at first glance. Many new Muslims may wonder, “did I make the right decision?”

The answer is a resounding “yes”!

Nothing worth having comes easy. And Islam is the absolute best thing to have in this world. Period.

Do What You Can, One Day at a Time

What you, as a new Muslim, need to know when implementing Islam into your life is that the first revelations to the Prophet Muhammad (peace be upon him) and his followers were not rules.

The first 10 years of revelations were about faith, the oneness of Allah and His majesty, love, and mercy. Only later when this part of the message was firm in the believers’ hearts did Allah reveal to the Prophet what rules we should follow so that we will not harm our own souls.

Islam was not a book plopped down on the believers, it was a process of revelation that lasted for 23 years.

And as a new convert, you should focus on learning the message of Islam, learning about Allah’s love and mercy, learning how to pray, and what the prayer means.

In other words, you should implement Islam in the same way Allah revealed it to His messenger (peace be upon him).

Allah knows your situation. He knows your capability. And Allah knows too much, too fast can lead to overload and burn out. That is why the message of Islam was not revealed in a day, but over time. And this is why you should only do what you can and learn little by little. Islam is not a sprint. It is a marathon.

Facilitate things to people (concerning religious matters), and do not make it hard for them and give them good tidings and do not make them run away (from Islam). (Al-Bukhari)

Find out what the first steps a new Muslim should take?

Keep Going When Friends are Scarce

Converting to Islam may mean that family members disown you, friends leave you, and challenges arise in your life.

This is not unusual.

All people who do great things have to suffer hatred and trials. But the peace you obtain when you have Islam in your life is far greater than any fake friend, fair weather family member, or test you face.

When trails of life get to you, remember the Prophets’ challenges. Ibrahim (Abraham) was thrown into a fire by his own father and people. He was utterly alone, but in the best company with Allah and the angel Jabril (Gabriel).

The Prophet Muhammad and his companions were considered outcasts in their clans. They were rejected by their society to the extent that their enemies boycotted them, insulted them, and tortured them. They had no friends but each other and Allah.

Prophet Yusuf (Joseph) was imprisoned. Prophet Nuh (Noah) preached Allah’s message to his people for 950 years, but only a very few followed him. Prophet Ayyub (Job) suffered almost every trial imaginable, but was still pleased with his Lord and his religion.

For me, looking to people who have suffered a great deal more than I could ever imagine puts things in perspective. Understanding that hard times are a source of reward gives me amazing comfort. Knowing that I am not the first to walk this path, and that as long as I stay on this path Allah will not leave me, makes me firm in my choice of Islam.

Remember that you are on a spectacular path that not many people travel, not even many born Muslims. And for your struggle to become closer to Allah, Allah will come closer to you.

Allah the Almighty said: I am as My servant thinks I am. I am with him when he makes mention of Me.

And if he draws near to Me an arm’s length, I draw near to him a fathom’s length. And if he comes to Me walking, I go to him at speed.” (Al-Buhkari)

If he has created you, and all that exists, Allah can surely get you through the times when you cannot see hope for the future. 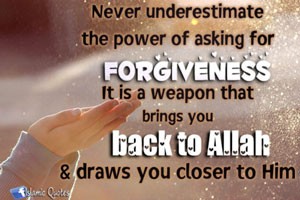 Allah’s Forgiveness Has No Limits

When you first come to Islam, Allah does not expect you to be perfect nor are you expected to know everything.

Even the most devout and learned of people are still not perfect. But when you do slip up and commit a sin you know is a sin, you must also know Allah is the Most Merciful.

I swear by Him in whose hand is my soul, if you were a people who did not commit sin, Allah would take you away and replace you with a people who would sin and then seek Allah’s forgiveness so He could forgive them. (Muslim)

Allah knows we are weak, He created us this way so that we would return to Him and ask forgiveness.

Thinking our sins are too great for forgiveness is limiting Allah’s capability. And we know Allah is all Capable, the owner of mercy.

Allah tells us in a hadith Qudsi:

O son of Adam, so long as you call upon Me and ask of Me, I shall forgive you for what you have done; and I shall not mind.

O son of Adam, were your sins to reach the clouds of the sky and were you then to ask forgiveness of Me, I would forgive you.

Stay Positive and Never Give up

Being positive doesn’t mean pretending that times aren’t tough, or being in denial about your own suffering. Being positive means acknowledging hard times but also knowing that things won’t always be the way they are right now.

Remind yourself often of what touched your heart about Islam and led you to bear witness that Allah is One and Muhammad is His messenger. Remember that any difficulty you may suffer, even if you stub your toe, Allah will reward you if you are just patient. Never lose hope in Allah.

Know that this life is just a small test with such an amazing and eternal reward if we just do our best to submit to our creator.

Never feel alone. There are many resources and support groups for you, the new Muslim. If you find yourself in hardship, know that others have been there and want to help.

Congratulations on your conversion!

Indeed, those who believe and do good deeds, the Beneficent will bestow love upon them. (Maryam 19: 96)