What do we do when things get hard? When the future seems hopeless and bleak?

A few days ago, a young talented boy of my country committed suicide. Why? Because he didn’t get an A in his exams. His parents were so adamant that he must get the top grade that they told him point blank not to show his face if he gets anything less. And so he didn’t show them his face. Instead, he went to the railway tracks, drank poison and dropped dead. They found his body after two days of search.

Some people, who don’t commit physical suicide, commit a spiritual one instead. They lose their faith. Others destroy relationships.

But there are some people around us who are incredible at the face of hardship. They not only avoid doing anything drastic; they stand firm, rock-solid, so that others crawl up to them and hold on to them for support.

What makes them different? 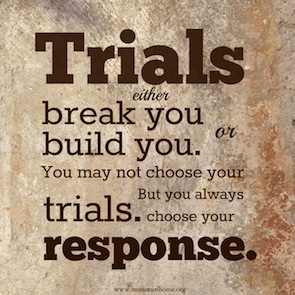 Wisdom in the Face of Hardship

In the previous article we discussed what hikmah (wisdom) means and how to gain it. The main source a Muslim can utilize to increase his level of wisdom is the Quran. Allah says:

He gives wisdom to whom He wills, and whoever has been given wisdom has certainly been given much good. And none will remember except those of understanding. (Quran 2:269)

Wisdom is a gift from Allah, and you already have that gift within your reach – the Quran.

The Prophet (peace be upon him) made a special dua for relief from sadness and anxiety, at the end of which he said:

… You make the Quran the life of my heart and the light of my breast, and a departure for my sorrow and a release for my anxiety. (Hisnulmuslim)

The Quran has the ability to turn your winter of hardship into a spring of bliss. If you can hold on to it, you will find contentment in your heart despite failing in exam, or despite going through a painful divorce. You will find the patience and courage to deal with hardship.

That contentment will help you overcome your difficulties and come out of hardship. Also, implementing the Quran in your life will bring Allah’s help and fill your life with barakah.

The First Aspect of Wisdom

The Quran tells you what you need to do when things become hard.

When a calamity strikes, the Quran reminds you to say:

Who, when disaster strikes them, say, ‘Indeed we belong to Allah, and indeed to Him we will return.’ (2:156)

1- Inna lillah: “Indeed, we belong to Allah.” We are Allah’s slaves. Forget the thing we lost, we ourselves belong to Him.

2- Wa inna ilayhi raji’un: “And we will return to Him.” This hardship isn’t the end of life. This worldly life is just the beginning.

The Prophet (peace be upon him) added a dua to be said after this statement:

In the dua, we are adding two more points:

After the Companion Abu Salamah died, his wife made this dua. Do you know what the outcome was? She was later married by the Prophet and became one of our Mothers. Her name is Umm Salamah.

These four reminders will keep our minds sane during a calamity.

The Second Aspect of Wisdom

Once we have our intellect safe from the influence of our emotions clouding over it, now we are ready to take some action to deal with the problems. For this we need the second aspect of wisdom – the wisdom to rummage through the different courses of action and choose the correct one. Here, the Quran and sunnah will come to your aid.

If one’s wife suddenly starts having hallucinations, what does he do? Does he take her to a psychiatrist, do ruqyah on her, or get a shaykh give her a magic amulet?

Despite being Muslims living in techy times, a surprising number of people would choose the latter option. This is nothing but ignorance, a lack of wisdom.

The general guidelines of the Quran and Sunnah tell us exactly what to do in such a circumstance:

These two aspects of wisdom, put together, form the perfect recipe to deal with hardships: the best attitude combined with the best course of action.