As I stepped outside the door of the sisters’ gathering room, I inhaled, filling my lungs with the crisp night air, ready to return to my apartment.
aaa

I made my Shahadah in April of 2002, Al-hamdulillah, before that year’s Ramadan, which happened to be in November.

I had decided to take a personal holiday from work to mark the first day of my first Ramadan, and then, quite typically actually, I stayed awake the entire night working on an article that happened to be on the subject of marriage.

The time slipped by so quickly and before I knew it, dawn was approaching and I remembered to make my intention to fast and prepared a small suhoor consisting of oatmeal, toast, and coffee.

After eating I prayed fajr, and with that behind me, I was (surprise!) suddenly overcome by sleep deprivation. Subhan’Allah, I had been awake the entire night and by 7:00 in the morning found that my eyes felt heavier than shovels full of Michigan (my birthplace) snow!

I knew my computer would wake me with the call to prayer for Dhuhr around the noon hour, so I curled up under the covers of my bed and fell into a deep slumber. Before I knew it, the singsong voice calling, “Allahu Akbar” was waking me for the next round of prayer. With a long stretch and a big yawn, I crawled out of my warm cocoon and set out to make wudu. Alas, ever pressing publishing deadlines loomed over the horizon once again, and shortly after prayer I was back at my computer keyboard.

The day quickly passed and before I knew it, the time had come to set out on the three-block walk to catch a bus that would take me to the Islamic Center on Massachusetts Avenue in Washington, D.C. for iftar and the Maghrib prayer.

I had not attended the Islamic Center for worship before, so I found myself in totally unfamiliar territory, which also lent itself to a slight case of nervousness. I had envisioned a hall or room filled with sisters all gathered to break their fast together, but, subhan’Allah, this I did not find.

Grateful for the childhood days of being in the Girl Scouts (always be prepared!), I had anticipated a snafu such as this, and before leaving my apartment I had tucked away in my pocketbook a zip-lock bag full dates from Saudi Arabia given to me by a friend.

Having found what appeared to be no iftar gathering, I made my way inside for whatever would happen next; the Maghrib prayer, of course, but I was still feeling confused, and even though I had arrived equipped with a bag of dates, I had not yet eaten one. Newbie that I was, I guess I was waiting for a clue from those around me as to what I should do next!

Tucked away in the small partitioned 10×10 corner at the rear of the prayer auditorium, my puzzlement continued as I found myself apparently the only sister arriving for the Maghrib prayer.

“No other women had arrived for the Maghrib prayer?!” I asked myself.

Of course, again, all of this was new to me, and being completely on my own, I grew ever more anxious about when I should break my fast as I was keenly aware from what I had studied regarding fasting, that, “It is preferred for the fasting person to hasten in breaking the fast when the sun has set.” Sahl ibn Sad reported that the Prophet said:

“The people will always be with the good as long as they hasten in breaking the fast.” (Al-Bukhari)

I had read about iftars, and because this was my first Ramadan, I had adopted a feeling about it the way most westerners consider any other holiday – in total anticipation! Masha’Allah, that is another reason why I had been awake the whole night before, sending out Ramadan greetings by email!

My concern about breaking my fast heightened as I was sure the Imam would begin the Maghrib prayer any moment, and absent observing anyone else breaking their fast, in a panic (and fear that I had already missed the moment), I slipped my little zip-lock bag out of my pocketbook and bit into one of my sweet little dates. Subhan’Allah, what a wonderful taste!

Suddenly the sound of the Imam’s voice came over the loudspeakers and the Maghrib prayer commenced. 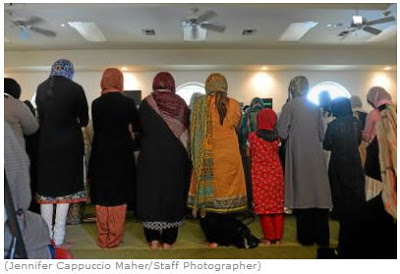 We finished the prayer and I slipped out of the mosque as awkwardly as I had entered; still feeling as though something had gone terribly awry as I was still perplexed to not find the iftar I had read about!

Well, of course there actually was an iftar, as I discovered upon bumping into a brother I had previously met, who informed me that across the way, down a set of stone steps, to the right, and tucked around the corner, there was an addition to the worship area, from which an aroma of solid foods had filled the crisp night air. Allah Akbar! The iftar!!

I tentatively opened the door to the building that apparently existed for the gathering of women, and immediately saw a table filled with pots and pans, and a sister standing behind it filling disposable plates. I glanced around and saw a handful of sisters and, well, even though I had eaten my sweet little dates, I still hungered for the “full experience” of my first Ramadan iftar, so I approached the table and was handed a plate full of food.

Turning from the table, plate in hand, I saw not a single person in the room that I had ever met before, and the few sisters there had already settled amongst themselves in small groups, sitting on the floor with their iftar meals. I glanced around until I spotted a quiet place against a wall, and I sat down on the floor with my plate, banana, and cup of tea, and commenced to eat.

Within just a few minutes another sister came and sat down not too far from me, and eventually we began to chat with one another. It turned out that she also was not a “regular” at the Islamic Center, but she explained that in the past she had often visited the Islamic Center to break her fast.

Alas, my stomach was full, and I felt exhausted. The day had already been long, with just 4 short hours of sleep. My new sister friend and I exchanged salams, and I left a few minutes behind her.

As I stepped outside the door of the sisters’ gathering room, I inhaled, filling my lungs with the crisp night air, ready to return to my apartment.

I walked up the short set of steps into the main entryway with the intention of heading to the sidewalk to hail a cab – if I was lucky, to find a bus – when a brother appeared in front of me that I had met the Sunday before on a visit to the Islamic Center for a shift of volunteer duty in the library (filling out address labels for literature being sent to prisoners that had written letters to the Islamic Center requesting books and information about Islam). Subhan’Allah, there I was being commandeered as a witness for a man wishing to make his Shahadah. What a blessing!

What a blessed evening it had turned out to be.

I made my way back down the stairs, headed out through the bookstore and back into the auditorium for the Isha prayer. Imagine my surprise to find that the little 10×10 partitioned cubicle for women to pray in had grown to about 15×15 and was completely filled with sisters. I was honestly so delighted! Al-hamdulillah!

Falling into line for Isha prayer, I was keenly aware to thank Allah subhanahu wa ta’ala for the great blessing of fellowship in worship that He had granted me that first day of Ramadan, 2002 – and I remain ever grateful for having been guided to Islam – now 15 years ago.