We received a question at Ask About Islam: How do we communicate with God? So I am going to say a few words today about talking to God, how do we talk to God?

So modern society, modern man and woman have become wary of religion. We need to be very careful though, my dear friends, in rejecting organized religion. We must be careful not to throw out; there is a saying in English, “throw out the baby with the bath water”. We must not throw out what’s essential, along with what is inessential. And if we’ve had enough of organized religion, we mustn’t reject God at the same time.

So How Do we Talk to God?

Muslims believe about God: Muslims believe that He created the heavens and the earth and everything in between. He’s Great and Almighty and His way out there; He’s far beyond anything we can imagine. But we also believe as Muslims that He knows every leaf that falls from every tree. We believe that He’s closer to us than our own jugular vein. He knows our secret thoughts. He knows everything about us.

So this God in who we believe, Allah, is not just some remote god, He’s a god we can talk to. Now many people watching maybe saying: “Well, I’d like to talk to God but I don’t know what to do; I don’t know how to start.”

We must remember though that we can’t control God, God isn’t like a tap that we turn on and off. You know, we want something and we normally want the answer straight away. God isn’t like that, and God doesn’t answer us by fax machine. You know we ask Him something, He doesn’t send the answer five minutes later in a fax. He answers, He replies, but often not in the way that we expect. So what we must do, we must become receptive to listen to what God is saying to us. Because praying is talking and listening, it’s like a conversation between two people; it’s talking and listening.

So train yourself to listen to Him. How do we train ourselves to be attentive to God? Well we read, we read religious things, we read the Quran, we read the sirah (life story) of our beloved Prophet Muhammad  (peace be upon him), his life, his sayings, his teachings. And by doing these things, we put ourselves in the frame of mind, that some religious frame of mind.

If all we do all the time is play on PlayStation or watch football on the television, or other things on the computer. If that’s all we do then when it comes time to listen to God, we’re not really in the mood; we’re not in the mode of listening. 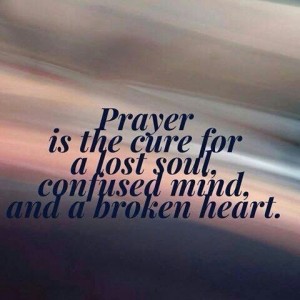 And so, Allah Almighty might be wanting to speak to us but our thoughts are so busy, our mind is so full of football that we have no time to listen to Him. So we need to take time, we need to go for a walk and enjoy the beauty of creation. If we don’t enjoy the beauty of creation, it is unlikely that we are going to hear the One who made all that is.

So we need to put ourselves in a situation where we can hear what He’s saying. In our prayer, in our talking to God, there are three things we can do:  We can praise Him, we can thank Him, and we can ask Him for things, it is called supplication. Three things, we praise Him, we say: “God, You are Most Great.”, Allahu Akbar, that’s what we say, You are Most Great. You’re greater than anything I could imagine.

If you’ve never prayed before, just use those simple words: “God. You are beyond my imagining, I can’t understand You”.  As Muslims, quite literarily we bow down before Him. But you can say to Him: “I bow down before your Greatness.”

We thank Him, we thank Him for all the wonderful things in our lives, for husbands and wives, and children, and good health, and sight, and hearing, and speech. We thank Him for these things.

So in talking to God, we’re honest, we can pretend with other people, we can fool everyone else, we can say nice things and appear to be such a good person. Allah knows everything about us. And even though He knows everything about us, He still wants to talk to us and listen; He still wants what is best for us. We don’t need to wear any masks in God’s presence, we can be ourselves; in a way we can’t be ourselves with anyone else, because He knows everything, there’s nothing we can hide from Him, because He knows it all. With our friends, we hide things, we keep things hidden: “Oh I can’t tell them that”. But with God, with Allah, He knows it.