A person should not be one who recites the Quran while he is heedless and going against what it says.
aaa

A Muslim’s faith in the grandeur and greatness of the Book of God is increased by what has been stated about it by the one who received its revelation, the best of creation, Prophet Muhammad who said:

“Read the Quran, for it shall come as an intercessor for its companion on the Day of Resurrection.” (Muslim)

When the person recites the Quran, he should adhere to the following manners:

1. He should recite it under the best circumstances, respectable, and honorable manner.

2. He should recite the Quran slowly and not be hasty in his recitation. He should not recite it in less than three nights. The Prophet has said:

3. He must have fear of God and humility while reciting the Quran. He should demonstrate sorrow and should cry, or he should try to cry if he is not able to cry. The Prophet said:

“Recite the Quran and weep. If you cannot weep, then try to make yourself weep.” (Ibn Majah)

4. One should also beautify his voice while reading the Quran. The Prophet said:

“Beautify the Quran by your voices.” (Ahmad) 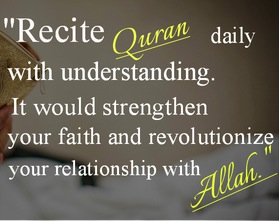 “He is not one of us who does not make his voice beautiful with the Quran.” (Al-Bukhari and Muslim)

“Allah has not permitted anything like He has permitted a Prophet to recite the Quran in a good voice. “(Al-Bukhari and Muslim)

5. He should recite in private if he fears that he would be reciting for show or reputation only or if he were to disturb those people who were praying. The Prophet said:

“The one who recites the Quran aloud is like one who publicly gives charity.”

It is known that it is preferred to give charity secretly unless there is some benefit to doing it publicly, such as encouraging others to follow one’s precedent. The same is true for reciting the Quran.

6. A person should recite the Quran while thinking about and pondering over its meaning, with due respect and presence of mind, in order to understand its meaning and purport.

7. A person should not be one who recites the Quran while he is heedless and going against what it says. In that case, he could be the cause for his own cursing by himself. For example, if he reads the verse:

And he is a liar or a wrongdoer, then he is simply cursing himself.

The following narration will demonstrate how wrong those people are who turn away from the Quran, who are heedless of it and spend their time in other pursuits. It is narrated that in the Torah it states that God has said:

“Are you not ashamed of yourselves in front of Me? If a letter comes to you from some of your brethren while you are walking on the road, you will stop and sit by the side of the road, read the letter, and understand it word by word, in order not to miss anything. This is the Book that I have revealed to you. Look how I have clearly explained everything in it. How many times have you passed by it to ponder over its lengths and widths and then you turn away from it?

It is something lighter in your eyes than your brethren. O My servant! If one of your brethren sits next to you, you turn to him with all of your attention and listen to his every word with your entire heart. If someone then talks to you or disturbs you, you will motion to him to stop. Here I am coming to you and speaking to you but you turn your heart away from Me. In your sight, I am less important than one of your brethren!”

8. A person should strive to have the characteristics that are descriptive of those people who are God’s people and His special people. Abdullah ibn Mas’ud once said:

Wuhaib ibn Al-Ward narrated that someone said to a man:

“The marvelous nature of the Quran chased away my sleep.”

And Dhun-Noon has said in lines of poetry:

“The Quran has stopped,

by its promises and threats,

the eyes from sleeping at night,

They understand from the Great Lord His Speech,

an understanding that makes the necks submit and surrender.”

Source: http://www.islaam.net
We use cookies on our website to give you the most relevant experience by remembering your preferences and repeat visits. By clicking “Accept”, you consent to the use of ALL the cookies.
Cookie settingsACCEPT
Manage consent