Have you ever seen the show, Bridezilla?

Not for entertainment, but out of curiosity like watching the aftermath of a car accident, hoping everyone gets out OK.

Bridezilla is a television show in the US that follows women as they plan and execute their weddings. The show is not educational but in a way it is.

I have watched a few episodes of Bridezilla and realized something about these women’s attitudes toward life. It seemed perfectly clear that these soon-to-be-wed women view their wedding as a means of ultimate fulfillment, pleasure, and achievement.

And these Bride-to-bes’ reactions—the attitudes that earns them the “zilla” part of their name that compares them to tyrannical lizards tearing down a major metropolis—comes out of being immensely let down because they think they are in control and severely stressed because money doesn’t buy everything.

It doesn’t help that these women lack manners and are almost always afflicted with a touch of narcissisms.

I will admit that some of their stress comes from the idea of the wedding as a show of social standing and every family or individual has to outdo every other family or individual. But on some level, these “bridezillas” have equated their wedding to heaven. The end will be all of life, perfection, and nothing will ever be better for them.

After watching this show and being reminded of people I have seen act like this even without a wedding involved, I realized that many people live in this world as if life is going to be or should be like jannah (heaven). Which is to say some people live day to day as “bridezillas.” 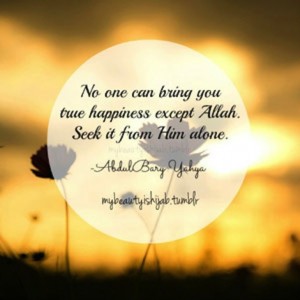 No Amount of Money will Make Life Like Jannah

“Money can’t buy happiness”. The saying is as old as money itself because it is ultimately true both in life and for the bridezilla. The more money sunk into the wedding or into day to day life, the more we expect out of it.

The greater our expectations, the more likely we are going to be let down. It is an expensive cycle of disappointment and entitlement that leads people down the path of bad manners and ingratitude.

Ultimate fulfillment does not come from having wealth. How many palaces have been lived in by miserable men? How many wealthy people have complete and very public breakdowns? How many times have we heard of people “who have it all” but commit suicide?

No matter how much we have, we will never be satisfied by the material world. The Prophet (peace be upon him) said:

“If the son of Adam possessed a valley full of gold he would want to have two valleys, yet his mouth will only be filled by earth. Allah turns towards those who turn in repentance.” (Al-Bukhari and Muslim)

Growing up in a middle class family in the US, I can tell you this is true. I was not rich (by American standards) but I had everything I needed and I got many things that I wanted. I never felt at ease and I thought that this unease came from the lack of some material possession.

I can tell you that no matter how many, latest and greatest brands you own, no matter how many shopping trips or extravagant dinners you have, material wealth will not fill the emptiness that is felt when you are far from Allah.

When I converted to Islam, my middle class standing was stripped from me. And for several years, I struggled to meet my basic needs. And even though I was homeless from time to time and often went without food, I never felt more at peace. 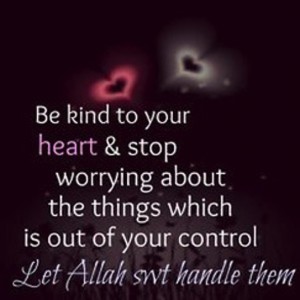 No Amount of Worrying or Planning will Make Life Like Jannah

A few days ago was my thirteenth wedding anniversary. My husband and I have never celebrated our anniversary before, but I thought it would be a nice surprise for him if I planned a special day.

Almost everything I planned fell through. The restaurant I wanted to take him to was closed and so were my second and third choices. It rained horribly all morning while I was out trying to find a gift for him. There were flash floods and power outages all day. The flowers I ordered to be delivered to his office to cheer his day weren’t delivered.

In keeping with the bridezilla parable, I looked at all that was going on despite my plans and hopes for the day, and realized if this had happened to me before I came to Islam and came to understand qadar of Allah, I would have flipped out and made the day worse with my panic and fit throwing.

Instead, understanding that I am not in control, I rolled with the punches. Our anniversary ended up being so much better than anything I could have planned. The storm stopped for a few hours while we celebrated. The restaurant we went to ended up being my husband’s favorite and we sat at a table with an amazing view.

The flowers never arrived that day, but ended up being a reason for my husband to look forward to going to work the next day. The only gift I was able to get in the horrible rain was a frame in which to put our marriage contract. And it ended up being beautiful and more meaningful than anything else I had in mind to get for him.

The saying, “let go and let God” could not be a more appropriate attitude for a believer.

What we plan might not always be the best thing for us. So if we can just let go and let Allah’s plan for us happen, cause it will anyway, we will be so much less stressed.

What is the use in getting upset at things outside of our control?

Why not trust that Allah has the best thing in store for you?

Why throw a fit when someone accidentally spills one, tiny drop of coffee on your new Manolo Blahniks? It might be that changing your shoes saved you from tripping and harming yourself. Or it might be the catalyst for understanding that everything in this world is temporary.

Why contemplate suicide because you didn’t get into your first choice college or you didn’t get the job you wanted? It might have been that that college or that job would have led you down a terrible, miserable path. Or that Allah planned for you to get into another college or have another job that allowed you to meet the people you needed to fulfill your ultimate goal.

When we fight Allah’s plan for us, we just end up frustrated, bitter, and stressed. When we are unsatisfied with Allah’s plans, we only display the worst manners and become ungrateful.

We have to keep in mind that money doesn’t make things happen, money doesn’t offer fulfillment or peace, Allah does. We have to understand that we are not in control, Allah is.

We must, most importantly, and constantly remind ourselves that this life is not the end all be all. Life is just a bridge to the hereafter. And what we accept, what we believe, and what we do will determine how well or poorly we fair in that next life.