“We had to stick our arms out through a small opening in the door,” Gulbahar Jalilova, a 54-year-old former detainee, who was held for more than a year, told France 24.

“We soon realized that after our injections that we didn’t get our periods anymore.”

She and up to 50 other women were crammed into a tiny cell “like we were just (a) piece of meat,” she said.

The accusations wfirmed by another woman, Mehrigul Tursun, 30, in a recent Amnesty International conference recently.

She felt “tired for about a week, lost my memories and felt depressed” after being administered a cocktail of drugs while imprisoned in 2017, she said.

After several months, she was released, having been diagnosed as mentally ill, and now lives in the United States. Doctors there later told her she had been sterilized.

The Population Research Institute, which advocates for a ban on intrusive and inhumane population control programs, accused China of forced sterilization on a large scale.

“The current Uighur population is less than 1 percent of China’s total population,” the group said. “To restrict and control the natural growth of a population of this size in any country is to totally annihilate and genocide them.

“Therefore, the Chinese birth control policy of forced abortion and sterilization of Uighur is not a policy of ensuring the overall quality of the Uighur population.

“On the contrary, it is to gradually exterminate them by imposing all the political, economic, and social means and restrictions.” 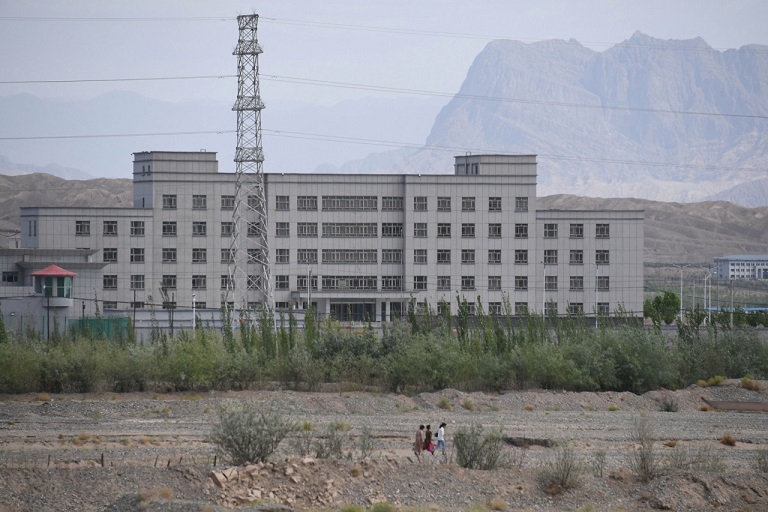 A facility believed to be a re-education camp where mostly Muslim ethnic minorities are detained, in Artux, north of Kashgar in China’s western Xinjiang region Getty Images

A set of new religious regulations were announced on February 2018, which included a declaration requiring the national flag to be raised by local mosques along with the removal of non-Chinese Islamic symbols.

Many mosque decorations are of Middle Eastern origin, including elaborate geometric designs, stylized Arabic script and the ubiquitous crescent moon and star.

Mosques were further required to adopt Chinese-architectural styles, with all domes to be demolished by the end of March.

Minors, defined as being under the age of 18, were banned from entering mosques to study, including during vacations.

Scholars were told they had to register their residential addresses as well as providing personal details and documentation.

A prohibition was also imposed on the use of loudspeakers for calls to prayer and Qur’anic recitations.