In one of Lost TV show’s episodes named “Whatever Happened, Happened”, the audiences were exposed to one of the most puzzling concepts adopted by Albert Einstein’s Special Relativity Theory.

“MILES: What the hell are you doing, Tubby?

MILES: You’re an idiot. [Takes a seat at the table]

HURLEY: “Back to the Future”, man. We came back in time to the island and changed stuff. So if little Ben dies, he’ll never grow up to be big Ben, who’s the one who made us come back here in the first place. Which means we can’t be here. And therefore, dude? We don’t exist.

MILES: Yeah. It doesn’t work like that. You can’t change anything. Your maniac Iraqi buddy shot Linus. That is what always happened. It’s just…we never experienced how it all turns out. [Hurley looks at Jack, confused.]

HURLEY: This is really confusing.

MILES: Yeah, well, get used to it. But the good news is that Linus didn’t die, so that means the kid can’t either. He’ll be fine.”

What Miles was explaining to Hurley was just exactly what is called a Time Travel Paradox.

According to Einstein the great 20th century physicist, physical time travel is a scientific phenomenon that can factually happen, yet there are few constraints. Einstein proposed the concept of time delay when he observed that light speed is the fastest universal speed that can’t be exceeded by anything in the cosmos.

He postulated time to be “expanding” when a beam of light is projected from a moving vehicle to preserve the speed of light as constant. Einstein found this really puzzling till he derived his famous special relativity equation from Lorenz equations.

The more the speed the more delay in relative time. This was the indirectly proportional relation that was finally bound by a single equation proposed by Einstein revealing a hidden mystery about time being a dimension, our 4th dimension.

Special relativity shows time to be relative, thus a moving vehicle approaching the speed of light shifts in a time delay that can’t be experienced by the vehicle’s driver, but by an external observer. This is what is known as the Twin Paradox.

When a twin brother decides to have a long spaceship journey and the other twin brother stays on Earth, the later will be an aged observer, while the traveling one will stay young due to his time travel in future.

Such a phenomenon is explained as a time delay that is not experienced by the time traveler, yet observed and felt by the reference point observer.

In order to travel through time, some constraints need to be understood. Einstein’s theory of special relativity is based on variables and a constant. The variables are time, velocity, distance, and mass, while the only constant is the speed of light.

Traveling to the future is much easier than traveling to the past, since relative high velocities for long time journeys can trigger a future time travel. This is very similar to how the 2D projection of a line rotated into the third-dimension appears to get shorter.

Length isn’t conserved simply because we are ignoring one of the dimensions. Yet, traveling to the past needs a traveler to exceed the speed of light which is impossible according to Einstein’s special relativity.

When getting close to the speed of light a traveler’s mass relatively increases vigorously causing the traveler’s body to stop moving due to Inertia.

When reaching the speed of light, the traveler’s mass also becomes totally unpredictable. Even though, these obstacles are just part of the fact that the speed of light is 299,792,458 m/s and no such speed can be achieved by current technologies.

It’s now clear that traveling to the future is possible, while past time travel is not achieved yet.

Though, let’s understand the concept Miles was explaining to Hurley. If a time traveler jumped to the period when his father didn’t get married and decides to kill him, will the time traveler be able to kill his father?

If the father was killed this means the traveler won’t be there anymore and he wouldn’t even die but vanish.

This is a paradox when the father has to stay alive till he gets married and the traveler gets born otherwise he won’t exist.

That’s why whenever the traveler tries to kill his father with a gun the gun doesn’t fire, or police officers arrive to stop him.

This is a philosophical concept that points at destiny. You can’t change your fate but can change how fate occurs. This is like having your arm broken as your fate, you can’t stop you arm from being broken but can choose the way it will be broken.

Ancient Chinese philosophers interpreted the book of changes the “I Ching” as the cycle of changing situations known as “hexagrams”.

According to Confusius and Lao Tzu you can’t stop changes, but you can have the best outcome of changes to pass to the next one.

To pass to the next change a wise man needs to find his inner traits and learn the art of yielding as explained in an earlier article.

This would always happen when a wise man acts through his superior self, acting through morals and noble values. That’s why a person should always accept destiny and find his way to inner peace.

Same concepts were adopted by the Ancient Mayan cosmology as an understanding of time as a series of changing events taking place due to ruling cycles of deities. This concept was explained in details in a previous article about the Mayan Long-Count Calendar.

In Islam, destiny is very clear when it comes to the story of Prophet Moses. The Holy Quran shows that Prophet Moses was destined to be who he is through different harsh situations in his life.

Prophet Moses’ fate was to be a man for a great mission and that’s why he had to get prepared for the unknown. At the point when he was ready, God revealed to him the mission of Exodus.

The Holy Quran says: “(20:37) We have shown favor to you for the second time. (20:38) Recall the time when We inspired your mother with this idea by means of a Revelation: (20:39) `Place this child in a box and put the box in the river; the river will cast it on to the bank and My enemy and his enemy will pick it up.

I Myself made you an object of love and so arranged things that you should be brought up under My supervision. (20:40) Recall the time when your sister was walking along; then she said: `May I inform you of one, who will bring up this child in the best manner?’

Thus We returned you to your mother so that her eye might be cooled and she might not be grieved. And (also remember that) you killed a certain person and We freed you from its evil (consequences) and put you through various trials and you stayed with the people of Madian for several years.

Now you have come back at the right time: (20:41) O Moses, I have molded you for My Mission. (20:42) You and your brother should go (on the Mission) with My Signs. And see that you do not show any negligence in remembering Me.” (Surat Taha).

Scientists never lost interest in achieving the impossible, that’s why Ronald Mallett from the University of Connecticut always wanted to achieve past time travel.

His time travel interest evolved when his father died of a heart attack when he was 10. Mallett believed in helping his father out of his heart attack. 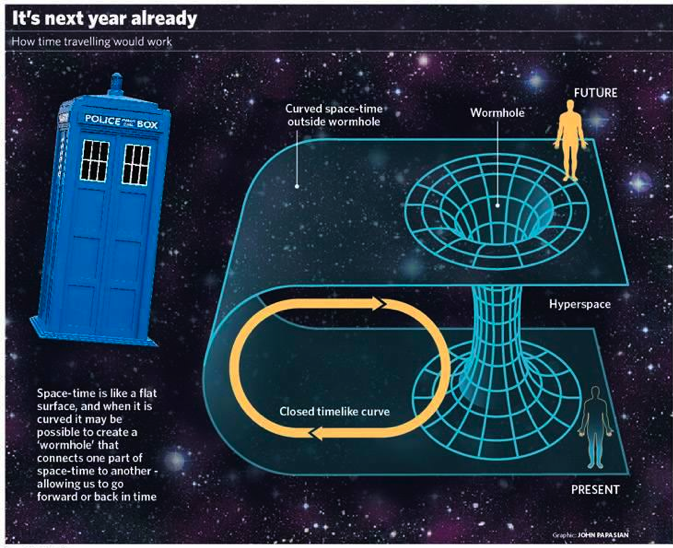 Time travel is a very important field of research to fix frequencies due to time delays in satellite signals such as GPS, and other applications.

However, this is not all about time travels, understanding space-time properties reveal secrets of teleportation, higher dimensions, and more.