Jung was like the adopted son and the successor of Freud from whom he knew about the unconscious and used to practice psychoanalysis.
aaa

Being able to live and cope with life is an amazing skill and trait that makes humans the most sophisticated living organism created by god. Humans didn’t just adapt with nature but also adapted with all creatures including themselves and succeeded in creating societies.

It is behavior that makes humans a very special kind between living creatures. Throughout history, humankind faced lots of obstacles in addition to what is more dangerous than nature, which is; humans themselves. It is the long search for that thing that philosophers and scientists been looking for. It’s this thing that has been always able to motivate humans, encourage them to live, reproduce and face deadly dangers.

The Search for the Unconscious

Back to the late 19th century the famous Austrian scientist Sigmund Freud (1856-1939) -who studied medicine and was a specialist in nervous disorders-, learnt hypnosis and decided to use it in his clinical practice. After learning how to use hypnosis in improving psychological pathogens, he started to find his way to unlock the secret of the unconscious.

As a scientist of his time he started to conduct experiments trying to understand what the unconscious is and why it responded to hypnosis showing improvement using psychotherapy.

By 1896 Freud started using a new term for his new kind of therapy that he called Psychoanalysis. Psychoanalysis was different from hypnosis since it didn’t use suggestion as in psychotherapy. In his new therapy he used to make patients relaxed and go into some sort of a hypnotic trance through which they experienced dream-like psychic patterns.

Freud believed these psychic patterns came from the unconscious revealing the needs of the psyche. Later on he developed new concepts in psychoanalysis therapy such as Free Association that helped patients improve through letting them speak while being relaxed to express all random feelings and thoughts created in their minds.

Through this concept he was able to have more explanations for dreams, believing that dreams are psychic mechanisms that are used to facilitate the important sleeping process for humans. Freud leaded a psychoanalytic team in which they gave treatments, researched and taught their new unconscious theory. One of the team members who got influenced by Freud was the Swiss Carl Gustav Jung (1875-1961).

Clash of the Titans

Jung was like the adopted son and the successor of Freud from whom he knew about the unconscious and used to practice psychoanalysis. However, this bond between Freud and Jung did not last so long, as they had lots of conflicts arguing about the unconscious and debating about the life driving force. The arguments were because unlike Jung, Freud believed that psychic mechanisms and patterns are the representation of human sexual needs and that represents a mental energy that forces life to proceed. As for Jung, he believed in more qualities and he saw the world through a denser spiritual vision.

For Freud, he considered spirituality, religion, mysticism, occultism, and God as nonscientific and that humans always needed God to feel good believing this was hallucination. As for Jung he developed new theories for the unconscious and a new type of treatment which he called Analytical Psychology.

Freud, the well-known Austrian psychologist, believed in a model which for him represented the human unconscious or the psyche as he named it. The psyche in this model consisted of three types of unconscious while each of them has needs and acts through psychic mechanisms. The ID, Ego, and Super Ego were the three components of the psyche.

Freud believed in two kinds of forces, these two forces were responsible for life to proceed; the first one is Life, whereas the second force is death, each taking action through two kinds of energies. Libido or Eros is the sexual mental energy that motivates life and needs to be satisfied through different stages of life; otherwise psychic pathogens can appear, whilst Thanatos is the death drive force.

Wilhelm Reich (1897-1957), another Austrian psychoanalyst believed also that Libido is an existing kind of energy which can be used in healing of pathogens. Reich named this energy “Orgon” after the word Orgasm and Organism. He believed Orgon is the reason of life yet his theory was totally rejected by scientists of his time.

Carl Jung was totally against Freud’s theory being all about sexual drive and found his way to analytical psychology after visiting the Eastern World. This resulted in the big conflict between Jung and Freud since Freud believed that Jung was into occultism due to his interest in the cult symbols and spirituality.

Jung and the Way to Archetypes 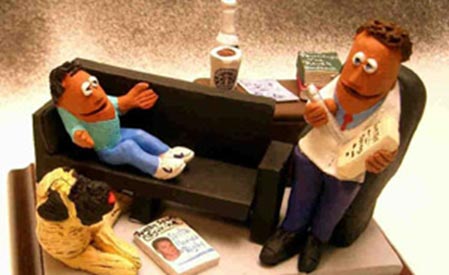 This is how the unconscious theories started and were developed by the early scientists Sigmund Freud and Carl Jung revealing the hidden part of human beings.

Analytical Psychology was the new unconscious therapy developed by Jung. This hypothesis was influenced by spirituality especially after Jung’s journey to the eastern world. Jung developed new concepts in his new approach. The collective unconscious was one of the most important new concepts as it showed an interaction between the psyche and the outer world that cause psychic patterns.

The collective unconscious appears in the conscious as the persona which is how the psyche appears in a way similar to masks. Persona is normally the way a person wants to be and not what he is. When the Persona becomes in conflict with the personal traits which is the real self, a person would fall into a psychic pathogen using defense mechanisms.

Jung introduced a new concept into analytical psychology which was the Archetypes. These archetypes were meanings or forces that dominate the world since ancient times such as life, death, marriage, heroes, etc… He believed that ancient myths were manifestations of the archetypal patterns.

Jung believed alchemical symbols and the alchemy process are the transformation of the impure soul from the metal lead to the perfected soul having the metal gold. As a therapy it was finding the traits of your real self being in the most centre and balancing the archetypes that makes the gold.

This is how the unconscious theories started and were developed by the early scientists Sigmund Freud and Carl Jung revealing the hidden part of human beings. By the mid 20th century many scientists started to conduct intensive experiments and till this day the unconscious research is still a hidden mystery.