In the water molecule, H2O, hydrogen is the atom that shares its electron with water.
aaa

In the past 60 years, there has been an explosion of knowledge in the world, and the ability of obtaining information has never been so simple, so straightforward, just a few keystrokes away.

However, a clear disadvantage of the shear amount of available data is where to start, and how to get the correct information in this vast sea of knowledge?

Of the most rapidly expanding sciences are biochemistry and molecular biology, where the advancement of computer science has enabled DNA technologies to expand like never before, causing some branches of the biological sciences to swell more than others.

So how do we make sense of it all? Can we really comprehend and grasp this ever-expanding branch of science that has paralyzed so many college, and graduate students? Is it really possible to understand, let alone like, biochemistry?

I answer with a resounding YES! And remind you with the everlasting words of our beloved Prophet Muhammad (PBUH) “Whoever treads a road seeking knowledge, Allah makes easier for him a road to paradise” (Narrated in Sahih Muslim).

In this series of articles, I attempt to explain some phenomena which are fundamental building blocks in biochemistry and biochemical research. I will also make an effort to convey to you what may be termed useful biochemistry, as opposed to the usual memorize and learn model, which has unfortunately become the norm in our educational upbringing!

Many of you may remember the traditional definition of a hydrogen bond:

“A weak chemical bond between an electronegative atom, such as fluorine, oxygen, or nitrogen, and a hydrogen atom bound to….” Bla bla blaaa!!

Let’s start by looking at hydrogen bonds through a different lens. How about reflecting upon the wonderful chemical that is most essential to life…water. How is it that only two types of elements can be the basis of so much life? What is it that makes an ice-cube, a glass of water, and steam different? Are they not all chemically the same?

If you reflect long enough, there is but one conclusion; that the molecule we call water remains the same in all three states, but the bonds in-between the water molecules, the forces that hold them together, the hydrogen bonds, are in completely different states!

Is it not peculiar that the hydrogen bonding in ice causes the water molecules to be spaced further apart than in liquid water, making the volume of the ice greater than the same amount of liquid water? What does this mean in the real world? Well, it means that ice floats! It means that whenever you see a frozen lake, only the top of the lake is frozen, allowing fish and other aquatic life to flourish below the ice, and feed on the lake bed. It also means you can skate on frozen lakes in winter, which would be a little hard to imagine if ice sunk rather than floated!

Needless to say, those very same hydrogen bonds become much more irregular as the ice melts into water, removing the pressure to conform to a rigid structure, and giving it the known properties of liquid water. 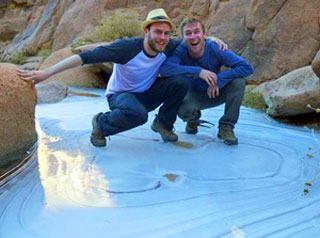 Hydrogen bonding in ice causes the water molecules to be spaced further apart than in liquid water, making the volume of the ice greater than the same amount of liquid water. It means that ice floats and whenever you see a frozen lake, only the top of the lake is frozen, allowing fish and other aquatic life to flourish below the ice, and feed on the lake bed. It also means you can skate on frozen lakes in winter, which would be a little hard to imagine if ice sunk rather than floated! (Image credit: Tourists standing on the surface of a frozen lake in the Egyptian city of Saint Katherine, Central South Sinai, Northeast Egypt).

Now that you have learned a little bit more about hydrogen bonds, you may have noticed that they are relatively weak. In fact, they are 50-100 times weaker than the covalent bonds that hold together the atoms within each water molecule! (1)

This is quite a noteworthy phenomenon! Why would extreme heat or cold have such a dramatic effect on hydrogen bonds between the molecules, while having no effect whatsoever on the covalent bonds within each molecule? What is the significance of this? And is this true for molecules other than water?

The answer to these questions may become clearer once we understand the intrinsic properties of the atoms that make up the water molecule, namely Oxygen and Hydrogen. In order to be stable, Oxygen needs two more electrons than what it naturally has. In the oxygen that we breath, this is achieved by sharing electrons with another oxygen atom, making the oxygen in the air ’O2’ instead of just ‘O’.

In the water molecule, H2O, hydrogen is the atom that shares its electron with water. However, since each hydrogen atom can only share one electron, oxygen needs two hydrogen atoms in order to reach maximum stability.

For example, the atom with a higher electronegativity, Oxygen in this case, pulls the shared electrons more towards itself, which means it has a slightly more negative charge than hydrogen (δ-). Conversely, this causes hydrogen to have a partial positive charge (δ+). The figure below illustrates this visually (2).

Isn’t it amazing how the intrinsic chemical properties of atoms, and hence their natural need for stability, is the basis of not just water, but all of life?! Shouldn’t we reflect upon this phenomenon, and start to think deeply on how chemical processes govern our biology?

What other roles do hydrogen bonds play in life? How does DNA depend so heavily on hydrogen bonds, and why can’t proteins survive without them?

I will attempt to answer these questions in the next issue of this series, and God willing, in the same simple manner that I have done here. Until then, I pray that you have benefited from my humble words, and ask for your prayers for the strength to continue. 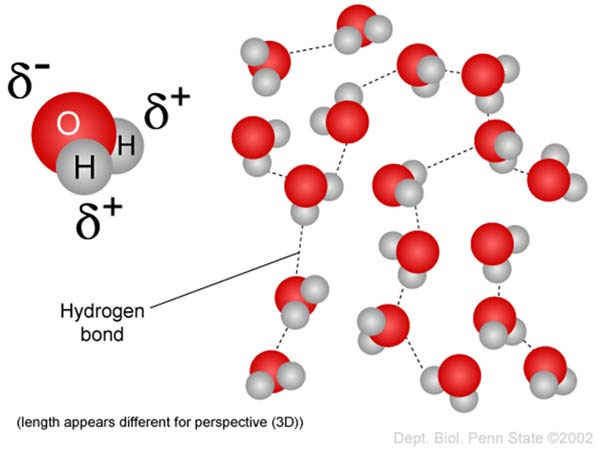