JAKARTA – In the most high-profile outreach to Muslims by America’s new administration, US Vice President Mike Pence toured the biggest mosque in Muslim-majority Indonesia, on Thursday, April 20, during a visit seen as a highly symbolic gesture from an administration that has been accused of stoking Islamophobia.

“Indonesia’s tradition of moderate Islam is frankly an inspiration to the world and we commend you and your people,” Pence said after talks with President Joko Widodo at the presidential palace in Jakarta, Agence France Presse (AFP) reported.

“In your nation as in mine, religion unifies, it doesn’t divide.”

In his current tour, which includes South Korea, Japan, and Australia, Pence started his visit to the world’s most populous Muslim-majority country by praising its moderate Islam as “an inspiration”.

He slipped off his shoes before being guided around the mosque, which is also the biggest in Southeast Asia, accompanied by his wife and two daughters in headscarves, as well as Istiqlal’s grand imam. 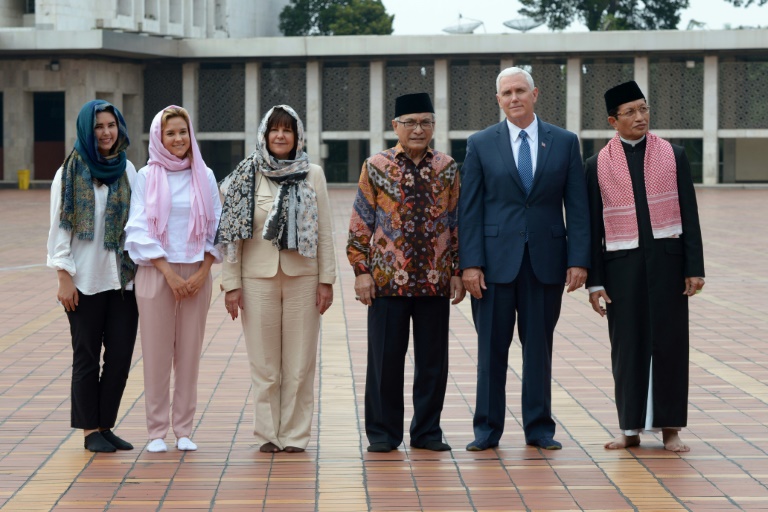 US Vice President Mike Pence and his family were taken on a tour of Istiqlal, Indonesia’s biggest mosque, in Jakarta © POOL/AFP / Adek BERRY

His visit represents the most high-profile outreach to Muslims by the Donald Trump administration since the brash billionaire came to office and echoes a similar trip by Barack and Michelle Obama in 2010.

As a presidential candidate, Trump often appeared to flirt with the far right as he railed against “radical Islamic terrorism”.

But, his administration has also tried to ban travelers from several Muslim-majority nations, citing concerns about terrorism, an effort currently being challenged in US courts.

At the mosque in Jakarta, Pence and his family also toured the cavernous main prayer room, which was empty during his visit but fills up with tens of thousands of worshippers during key dates in the Muslim calendar, and admired the towering dome.

Pence then held an interfaith dialogue behind closed doors with representatives of the Christian, Buddhist, Confucian, Hindu and Muslim faiths.