“Our combined efforts create something larger than the sum of its parts, just as we make something greater when we combine our individual personalities, desires, beliefs and energies to make the world a better place for all of us,” Stu Needel, temple’s social action co-chair and a board of trustees member, told Baltimore Sun.

According to Jonas Vogelhut, vice president of membership for the temple, about 135 people attended the event,  including members of Temple Adas Shalom, St. James AME Church, and Al Falaah mosque in Abingdon.

The multi-faith gathering was organized by Harford County Alliance of Abrahamic Faiths.

Temple Adas Shalom’s Rabbi, Gila Ruskin, said “We are called by God to increase the light, each of us individually, as communities and as the entire family of humankind.” 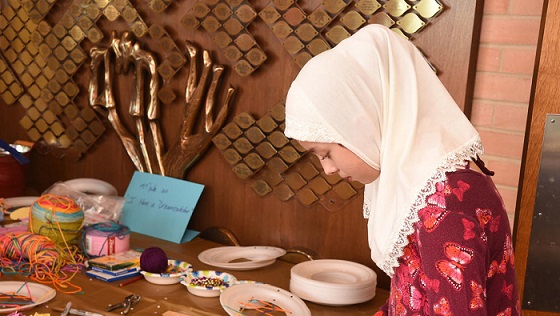 On his behalf, Needel gave a report on the blood drive, which netted 16 usable units for the Red Cross.

“Today we have saved up to 48 lives, just from our donations. Each unit has three components that can be used to save a patient,” he informed.

Abdullah Kobiljonov, from Bel Air, Los Angeles, recited verses from the Qur’an, sang in Arabic, and read the English translation of the 13th verse from Surat Al-Hujurat in the Qur’an, which says: “Indeed, the most noble of you in the sight of Allah is the most righteous of you.”

The Qur’an encourages followers of Islam to “avoid much negative assumption,” Kobiljonov read. “Indeed, some assumption is sin, and do not spy or backbite each other,” he recited. “Would one of you like to eat the flesh of his dead brother? You will detest it.”

By the end of the event, Sheikh Omar Baloch, imam of Masjid Al Falaah, asked God to grant the participants inner and outer peace, saying “May God give us inner peace so we can bring outer peace to the world.”