“I pledge to every citizen of our land that I will be president for all Americans, and this is so important to me,” spoke the 45th President of the United States of America in his victory speech, in stark contrast to the divisive politics he used throughout his election campaign.

At the time of writing, the silence is deafening, not a single head of state has called to congratulate him on his victory.

Indeed his own fan base must wonder why he continued to say “..Ours was not a campaign, but an incredible and great movement made up of millions of hard working men and women… It is a movement comprised of Americans of all races, religions, backgrounds and beliefs.”

A bankrupted billionaire in the White House with an immigrant soft-porn posing wife as the first lady, his campaign relied on division and the normalization of misogyny on a grand scale.

It is as if all those beer-guzzling, gun-toting, hooters-frequenting, race-hating voters finally found their spokesman.

With many comparing this to #Brexit, the English broadcaster Julia Hartley-Brewer said, “This is NOTHING like Brexit. Voting for UK sovereignty is NOT the same as voting for a racist, sexist, ignorant pig as US President.”

And with 53% of white women voting for Trump, this demonstrates either extremely dangerous levels of low self-esteem or such hatred for the existing system that these 53% of women are willing to accept as their Commander in Chief a man they would leave their teenage daughter with at a party.

“Wow! Just think, in a couple of years I’ll be dating you,” he said after watching a youth choir sing carols. 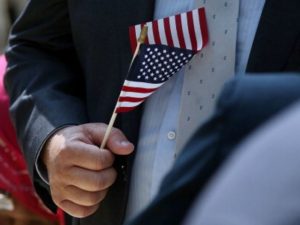 The reaction from British Muslims is as expected:

“When you dumb down a nation so much…”

“This reminds me of Back to the Future Part 2, where Biff is in charge of the alternative timelime in 1985. Time to start looking for a sports almanac in Trump’s pocket!”

“Wondering how I’m going to explain to the kids that democracy enabled a xenophobic, sexist, violent, bigoted, ill-informed liar to become President.”

“I do worry that to the militia and racist types they will see victory as open season on non-whites and Muslims.”

“Twilight Zone… please tell me I am somehow in an episode of Fringe and it’s a parallel universe. Brexit was a shock enough.”

“The Berlin wall came down on this day in 1989. The Mexican wall an the virtual wall for all Muslims goes up today in 2016.”

“For our planet, for women, and for democracy, his is beyond depressing. How did this man become president? How could anyone vote for him?”

Of course not all commentary is negative, Mushfaque Chowdhury, a banker, wrote, “In all seriousness, I think we need a Trump presidency. Democracy has been stagnant for a while and you often need a kick from an outsider to change things. This is the price of political correctness – eventually there is a push back and this is it. Trump is that disruption.”

To an extent he is right. It is the decline of the middle classes, not just in the United States but also here in the UK that has driven Brexit and not Trump.

Our existing model of capitalism means that we are often and increasingly working long hours, for less pay. A recent UN report observed that austerity measures in the UK breaches the rights of those most in need.

As the human population increases, resources become scarce, and with technology enabling the rise of automation with even more intelligent robots, there have been calls by some suggesting a Star-Trek style universal income, with fairer rights assigned to individuals.

The idea is to ensure that every person not only has a living wage, but in having their basic needs met, will no longer focus on blaming others, for their losses, hardships or suffering. And this is exactly what has enabled Trump, a large portion of the American population who were sold the American dream, do not live that dream. In frustration they then lash out on whoever and whatever they perceive to be less American. 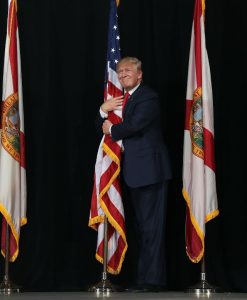 Across the pond, the conservative American Muslim Scholar Yasir Qadhi echoed this sentiment writing, “Looks like I might have missed the mark on my previous post. I did not realize that I was surrounded by people so completely and totally disenfranchised with the system that, despite the fact many of them might not like racists and bigots, they felt the ‘outsider’ was a better deal than a seasoned insider.”

As one American Muslim convert, of Jewish heritage, Laura Miller, wrote, “I’m so glad Dad is not alive to see this descent into barbarism.”

Many years ago much of the world watched on in shock as America was attacked on 9/11. Since numerous wars have been fought fighting a lesser known enemy, Al Qaida, resulting in the creation of new enemies, ISIS.

For years, these and other terrorist organizations have sought ways to destroy the values which many Americans believe in principle but struggle. But all it seems they had to do was wait and watch the nation slowly implode on 11/9 – a reversal of misfortune.

Trump spoke a truth where he said, “As I’ve said from the beginning, ours was not a campaign, but rather an incredible and great movement.” That so much of it paralleled Hilter-styled policies of division and blame to secure a power base reflects how far the nation which despite its weaknesses was once the benchmark of global standards, has fallen.

But here’s a thought. The racism displayed by disenfranchised white Americans towards current President Obama is no different to the same underlying racism prevalent around large swathes of the Muslim world; simply speak to some Arabs, or some from the South Asian community. Or ask conservative Sunni Muslims their opinion of Shiite Muslims. Trump has taken all of the hate that sits underneath and given people the confidence to express it. And while it may be better out than in, it is a disturbing insight to how much hate actually exists in the United States of America and how much further the nation needs to go to regain its image as ‘leader of the free world.’

Invariable the next few days will be full of shock and commentary. But as Seima Iqbal an English doctor writes: