NORTH CAROLINA – Losing the three young Muslims two years ago, the families and friends of Yusor Abu-Salha, her husband Deah Barakat, and her sister Razan Abu-Salha are remembering their legacy with bitterness as their country falls further into the abyss of Islamophobia, racism and bigotry.

“We bleed for them and their families,” Omid Safi, director of the Duke Islamic Studies Center, told Daily Tarheel.

“We all realize that if the most beautiful, most socially conscious of us can be hunted down in the comfort of our own home, then all of us are vulnerable.”

A neighbor, Craig Stephen Hicks, has been charged with murder in their deaths and could face the death penalty if convicted.

In the two years since their deaths, Safi said he has seen America fall further into the abyss of Islamophobia, racism and bigotry.

“It’s not simply about Islam and Muslims,” Safi said.

“It is about the very future of the American experiment as a multi-racial, multi-religious, multi-ethnic democracy.”

Lina Chaarawi, Yusor and Razan’s cousin, lamented the fact that President Donald Trump’s rhetoric led to a sharp increase in the Islamophobic rhetoric that led to the death of the three young Muslims.

“Seeing the protests across the country, people gathering at the airports, even simple tweets — it’s all very empowering,” Chaarawi said.

Imad Ahmad, a friend of Deah’s, believes that Trump’s actions are not representative of America as a whole.

“With this recent executive order, and what I saw with the protests at the airport, everyone is coming together because they have this common goal,” Ahmad said.

“Because of Trump, we have a common foundation and are able to reach out to other people — so in a sense this came out to be a positive.” 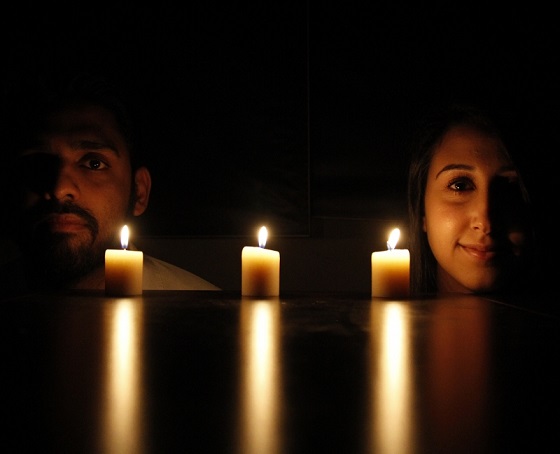 Imad Ahmad (left), Deah’s best friend and roommate, and Lina Chaarawi, Yusor and Razan’s cousin, pose in front of candles for each of Our Three Winners.

The family members expressed hope that people can become aware of the hateful rhetoric spreading through the country and open their hearts to everyone.

“I don’t think by any means that the Muslims are the only ones suffering in America — I think there are many groups, but everybody’s struggle is our struggle,” Yousef Abu-Salha, Yusor and Razan’s brother, said.

Khadiga Konsouh, vice president of the UNC Muslim Students Association, said she wished people would approach Muslims and ask questions to erase their negativism and uncertainty.

“As we approach the anniversary of their death, it’s important to kind of really humble yourself and take away that fear or any negativity you have towards a race, gender or religion,” Khadiga said.

Deah, Yusor and Razan are remembered by many for their commitment to service.

“They used to do what they loved, but they would use that to do good,” Yousef said.

“Everything they did here was very inspirational.”

Before his death, Deah was planning to participate in Project: Refugee Smiles, a mission to provide medical and dental services to refugees on the Syrian border. The mission’s trip to the Syrian border, which occurs annually, will now be carried out in honor of Our Three Winners.

An endowment fund has been set up in honor of Our Three Winners to continue their legacy. The proceeds go towards service projects, such as education funding and dental relief.

“Even with all the things that are happening in the political climate today, I would like people to remember people like Deah, Yusor and Razan who gave back to the community, and that we’re all striving to make America a better place,” Ahmad said.