CALIFORNIA – America is known for its diversity and breadth of international culture that resides side by side, from sunny California, to the high rises of New York and Chicago.

Ultimately, the pouring in of immigrants has fueled a large market for ethnic markets. These markets have found a home in ethnic enclaves, and throughout the generations, have become immersed in major cities everywhere in the United States.

Traditionally, many Muslim communities have been centered in major cities. Examples can be seen in cities like Chicago, where “Little India” can be found on Devon Avenue in the north side of Chicago. Streets like Devon Avenue are jam packed with nascent immigrant communities with a mix of Indian/Pakistani immigrants alongside Syrian and Iraqi refugees that have recently arrived in the United State.

In a visit to Anaheim, California, in an area locally known as “Little Gaza”, I had the pleasure of visiting several businesses and restaurants that catered to halal foods, Muslim customers, and ultimately immigrant communities.

I had dinner at a restaurant by the name of Al Amir Bakery, and the piping hot and freshly made Mana’eesh were hand tossed and made to the utmost perfection with a touch of a Lebanese Flair.

I asked the owner and workers there as to what had inspired them to create something that I had not seen outside of a Muslim majority country.

“We wanted to recreate something we grew up on, and something that would cater to our diet as Muslims,” they told AboutIslam.net.

Another example of a rising Muslim Business can be seen in “The Brother’s Produce” in Paterson, New Jersey, a hub for Palestinian and Turkish immigrants who live on the outskirts of New York City.

At every level of the US food chain, halal already occupies a small but rapidly expanding niche.

In grocery and convenience stores and similar outlets, research firm Nielsen estimates that sales reached $1.9 billion in the 12 months through August, a 15 percent increase from 2012. 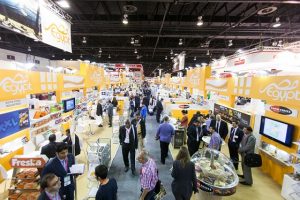 As one is able to see the various communities that assemble in Paterson, the supermarket catches a great deal of attention due to the variety of fresh, halal, and diverse produce, locally grown and imported from around the world.

It particularly serves as an excellent hub for fresh groceries that are also used for various restaurants and bakeries in the neighborhood.

Most Muslim-owned businesses tend to sell the same type of products to one another, with certain niche products, whether they are “halal marshmallows” or Islamic-themed decorations, can be found in specific stores or supermarkets in the area.

In the Midwest, Dearborn, MI and Bridgeview, IL tend to be one of the most densely populated Muslim communities in the region with hundreds of Muslim businesses found in both cities.

In areas that border Bridgeview, IL, situated in the South Suburbs of Chicago, you can find various Muslim organizations such as Islamic Relief, alongside many other restaurants and stores populate the area.

The Muslim community and the variety of businesses that cater to this area are centered on one of the largest and most influential Mosques in America, “Mosque Foundation” which serves a community of up to 50,000 Muslims alone.

However, Muslim-owned businesses tend to not merely stop at restaurants and superstores. In many neighborhoods, one can find several medical facilities and even legal and financial firms that cater to Muslim audiences.

An entire market exists as well that caters to Muslim women, from modest clothing like INAYAH and Verona boutique, and has a big number of customers in the United States alongside local stores like Al Omari Fashion in Bridgeview, IL.

Furthermore, there is a unique medical clinic that specializes in women’s health is known through Woman’s Choice in Worth, IL, that particularly addresses a large amount of Muslim women clientele.

Overall, the market that is spearheaded by Muslims regarding very Muslim niche stores are part of a booming economy and a large purchasing power that exists among Muslims.

The direction by which ethnic enclaves that are inhabited by Muslims have expanded into a series of markets that are marketed and heavily revolved around the great impact of Muslim owned businesses.

With the influx of more immigrants and second generation Muslim immigrants, these businesses will forever find a home in the American land of opportunities.