TORONTO – World Interfaith Harmony Week is being celebrated in Toronto this week with a series of multi-faith gatherings including a forum of Faith leaders held on Tuesday, February 5th to discuss the common experiences of religious communities around the issue of violence against women.

The event themed ‘Break the Silence’ was hosted by the National Council of Jewish Women of Canada (NCJWC) and organized by One Voice which is a recently formed group of multi-faith women working to create a guide for faith leaders to be able to respond to the issue of violence against women.

“We started this coalition called One Voice of multi-faith women working together to eliminate violence against women,” said Eva Karpati, President of the National Council of Jewish Women of Canada (NCJWC) Toronto in her welcoming remarks.

“There was this instant bond of all of us working together, diverse faiths but with similar compassion and with admiration for each other.”

“I think our group is a model for the UN and interfaith collaboration,” she added. “We come from a place of hope and this is why we are working on this project because we believe that there is something that we can do about it.”

“On any given night, 6,000 women and children are sleeping in shelters because it is not safe to do so at home,” added Singh.

“Our panelists this evening come from diverse perspectives all who support the foundational value to end violence against women.” 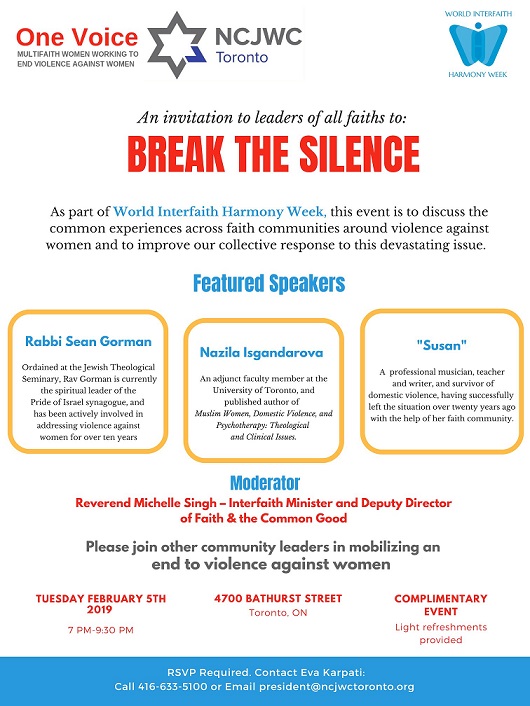 Rabbi Sean Gorman who is actively engaged in addressing the issue of violence against women for over ten years spoke of the role of religious leaders.

“How should rabbis, priests, and imams pro-act on the issue of violence against women?” asked Rabbi Gorman.

“The first question that I would ask is this – has your clergy spoken about domestic violence from the pulpit. Has your clergy address this issue in writing?”

“Part of our job when we stand up there to give a sermon and teach is to disturb the comfortable and to comfort the disturbed,” added Rabbi Gorman. “To stand up at the pulpit and speak and write about domestic violence allows those who are experiencing this to understand and know that someone cares.”

Dr. Nazila Isgandarova, an adjunct faculty member at the University of Toronto, spoke extensively about the theories and reasons that lead men to be violent towards women.

“All of us are also paying for the cost of domestic violence – for police for psychological and psychiatric support for women, for court hearings – this is a social problem and we need to tackle domestic violence at every level.”

The City of Toronto has proclaimed this week as Interfaith Harmony Week.

“I, Mayor John Tory, on behalf of Toronto City Council, do hereby proclaim February 1 – 7, 2019 as “Interfaith Harmony Week” in the City of Toronto,” reads the official statement from Mayor Tory.

“The City of Toronto acknowledges the valued contributions that the interfaith communities in Toronto make to strengthen our society and contribute to our city’s motto “Diversity Our Strength“,” adds the Mayor.

“Toronto has become a model city where all religions, faiths, and beliefs are respected and accepted.”

The World Interfaith Harmony Week provides a platform – one week in a year – when all interfaith groups and other groups of goodwill can show the world what a powerful movement the interfaith community is.

The week allows for people of various faiths, cultures, and traditions to become aware of each other through activities designed to bring them together and recognize that the common values we hold far outweigh our differences.