“We researched and interviewed designers in different areas of the globe, from the Middle East to Malaysia to Indonesia, and understood that there was this emergent outburst of energy and creativity coming from a lot of Muslim majority countries,” said Laura Camerlengo, the associate curator of costume and textiles for the Fine Arts Museums of San Francisco, and one of the organizers of the exhibition, Wisconsin Muslim Journal reported.

“As such, a lot of the focus of the exhibition is on designers from these countries, and emerging designers.”

Focusing on Muslim women fashion, Contemporary Muslim Fashions will take over San Francisco’s de Young Museum from September 22, to shed a light on the evolution of Islamic style via Nike hijabs, online influencers, and couture gowns.

The show will explore modest fashion over the past few years, focusing on the role of hijab and sportswear.

The show also touches on communities in Europe and the US and features contributions from up-and-coming British designers, such as athleisure entrepreneur Yasmin Sobeih.

“The exhibition shows both regional differences, but also the commonality across the globe,” added Jill D’Alessandro, a fellow organizer and curator of costume and textile arts.

“In some areas, we’ve done that through photographic representation and film. We also have a section on social media and art photography”.

It’s hoped this showcase will replicate the success of some of the more recent fashion exhibitions. 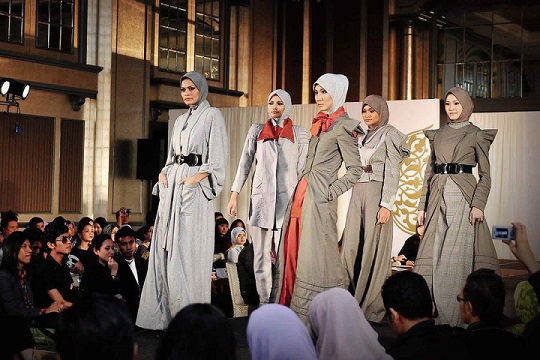 The show, which will run until 6 January 2019, will feature a selection of diasporic fashion, which  includes designs by US label Slow Factory, founded by Lebanese-born Celine Semaan who partnered with the American Civil Liberties Union to create a collection opposing Donald Trump’s ‘Muslim ban’ silk scarves embellished with the word ‘banned’, and a bomber jacket with the US First Amendment written in English and Arabic.

“We decided to mount the exhibition prior to our current president, but it is an important time for us to do it,” adds Camerlengo.

“So many of the artists and designers we have worked with have talked about the role of fashion as an agent for positive change”.

Non-Muslim international fashion lines and retailers are also trying to tap into the niche market for modest clothing.