NEW YORK – In a gesture of support, interfaith demonstrators gathering in New York City to mark the one-year anniversary of President Donald Trump’s first “Muslim ban” formed a human chain of protection around Muslims as they knelt down in the public space for Friday prayers.

“It’s what we should do as Americans.”

Breyer added she hoped the action provided a feeling of safety and security for the worshippers, many of whom were students from nearby New York University.

Friday’s demonstration in New York’s Washington Square Park took place a year after Donald Trump’s first executive order setting out the ban, which has been blocked by the courts. 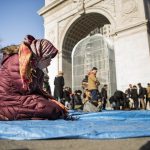 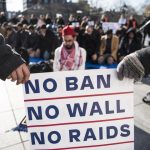 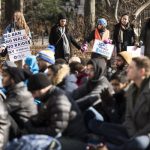 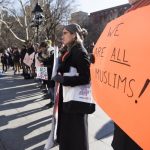 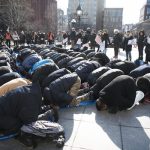 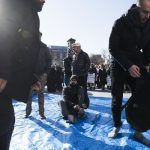 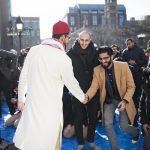 The US Supreme Court has agreed to decide the legality of the latest version of Trump’s ban, which affects residents from six countries instead of the original seven.

The policy blocks entry into the US of most people from Chad, Iran, Libya, Somalia, Syria, and Yemen.

Murad Awawdeh, vice president of advocacy at the New York Immigration Coalition, one of the groups that organized the rally, said he hopes Friday’s protest will restore the initial fervor around the travel ban.

“The Trump administration didn’t just go after the Muslims. They were the first targets,” Awawdeh said.

“This is going to continue to be a fight and a struggle.”