MONTREAL – Hate crimes in Montreal have seen a spike since the beginning on 2017, with religiously-motivated crimes making more than half of reported attacks.

“People reporting is part of the solution because we can have a portrait of what’s going on,” Lieutenant Detective Line Lemay of the Montreal police Hate Crimes unit told CBC on Tuesday, July 4.

In the first half of 2017, between Jan. 1 and June 1, police received 101 reports of hate crimes or hate incidents.

More than half of these crimes, 57, were religiously motivated.

That’s almost as many as the 137 crimes reported for the entire year of 2016.

Though Montreal police department did not indicate which religions were targeted, Lemay said the Hate Crimes unit saw a big bump in reports after January’s Quebec City mosque shooting.

“Not only the Quebec City shooting, but also everything that happened in other countries has a big [effect] on the numbers that are reported,” he said. 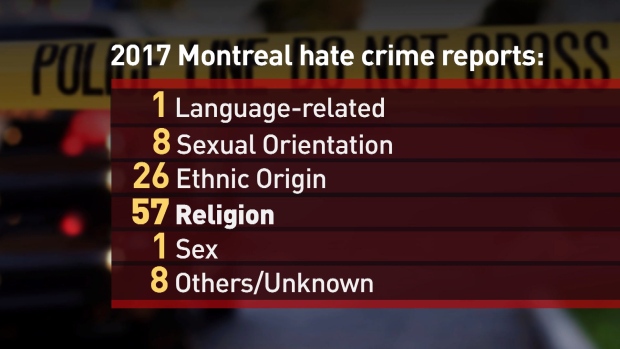 At the Canadian Muslim Forum, staff members say they hear about Muslims being targeted by hate crimes all the time.

“We strongly believe what has been reported is much much less than what is actually happening,” said Samer Majzoub, President of the Canadian Muslim Forum. “We believe strongly that this needs a lot of work to be addressed.”

Police are encouraging people to call if they believe they’re being discriminated against.

“Even if it’s not criminal, we do work on these cases…to help prevent things from becoming a crime,” he said.

“We really need to have the confidence of the population to be able to work on this problem,” Lemay said, adding that the unit will continue to work with organizations across the city and build trust with communities frequently targeted.