ARIZONA – An Arizona teacher has allegedly told a Muslim refugee student that she would be excited to see him being deported from the United State if Republican presidential candidate Donald Trump was elected next week.

“I can’t wait until Trump is elected,” the teacher reportedly told the student, Think Progress reported on Monday, October 31.

“He’s going to deport all you Muslims. Muslims shouldn’t be given visas. They’ll probably take away your visa and deport you. You’re going to be the next terrorist, I bet.”

The complaint alleged that a teacher at the Academy of Excellence, a public charter school in Phoenix, singled out a Muslim refugee student for his faith and nationality.

The teacher, Faye Myles, told the student, A.A., that she couldn’t wait for Trump to become president because that would mean the student could get deported. 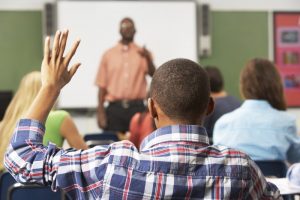 Many academics are already concerned that Trump’s behavior could have a big impact in the classroom.

A.A. is a Muslim refugee from Somalia who came to the United States in 2012. Up until January, A.A., an 11-year-old, had been enrolled at the school as a sixth grader.

The complaint further alleged that Myles’ harassment “was extensive,” going so far as to choke A.A. “until his eyes began to water from the pain.”

The teacher also showed the class a video clip of the September 11, 2001 hijackers and suggested that A.A. was going to become a terrorist, saying “That’s going to be you.”

Over the past months, Republican presidential candidate Donald Trump has been accused of fueling anti-Muslim and anti-refugee sentiment, pointedly calling for Muslims to be prevented from entering the United States in December last year.

The rhetoric has made a surge in anti-Muslim attacks.

In a 2015 hate crime statistics report, 16.1 percent of 1,140 religious hate crime victims were Muslim, up from previous years, despite the fact that overall hate crime numbers among other religious groups were declining, the FBI said.

Many academics are already concerned that Trump’s behavior could have a big impact in the classroom.

In an open letter, ten former state and national Teachers of the Year wrote that Trump’s “behavior goes against everything we teach the children in our care.”