PHOENIX – In a bid to defend their proud identity as American Muslims, two young women from Phoenix are making inroads into the world of modest fashion by running an affordable line of scarves or hijab, taking a stand against hate-filled rhetoric of President Trump.

“I don’t think we figured out what we wanted to say as a brand until Donald Trump was campaigning,” Furdos Nurhussen told Phoenix New Times.

“Just seeing the whole campaign and everything that happened after the election – it made both of us more proud of who we are,” Nurhussen added.

“And more confident that being African, being Muslim – all of our identities – that was American.”

Nurhussen and Najma Hassan, both 24, are running an affordable line of scarves called the Amara Collection.

In the relatively niche world of headscarf fashion lines, Nurhussen and Hassan offer luxury-quality scarves without the exorbitant price tag; most are between $12-14.

According to Nurhussen, the co-founders take an edgier approach to fashion, such as a recent photoshoot that featured intense pink-and-blue neon lighting.

“We got really great feedback from a lot of girls – so enthusiastic and happy to see someone like them in fashion,” Nurhussen said.

“Even in the Muslim modest fashion world, there’s not a lot of black females in modeling, or in any of that. Or even black Muslim business owners; we just don’t see a lot of that.” 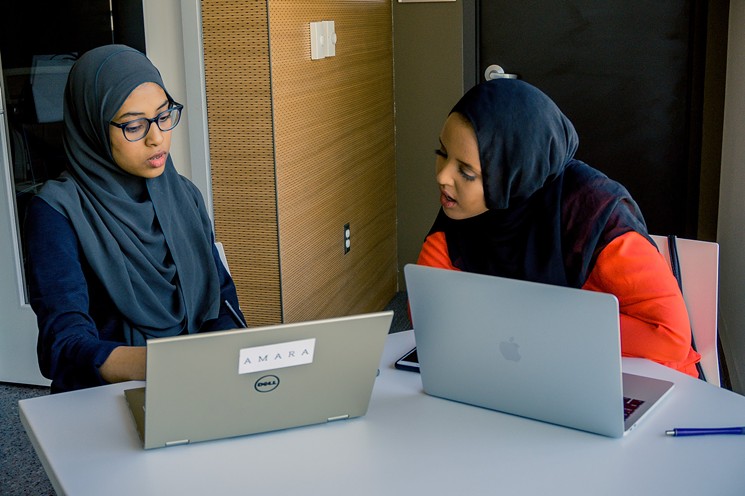 The daughter of Ethiopian immigrants, Nurhussen had an early introduction to the art of clothing and style as her father worked as a tailor for 10 years.

“We had a sewing machine at home and he would sew and alter clothing for clients – he even taught me to sew a little bit,” Nurhussen said.

“It was already a part of my life when I was really young, even though I wasn’t planning on going into fashion, and my parents didn’t want me to go that direction anyway.”

“We took our models and went to the mountain as the sun was setting,” Nurhussen said. “And we actually chose the scarf colors based off the mountain earth tones and the colors you see when the sunlight reflects off certain elements in nature.”

In addition to their online store, Amara has sold items at pop-up stores around Phoenix and in Tempe.

“A lot of modest fashion companies are based in LA or New York or even Toronto, and they have this big-city feel,” she explained.

“Even though Phoenix is a big city, I think things are slower here or more spaced out.”

In a world of internet, their brand made inroads into UK and Canada as well.

“There’s a strong brand recognition among the female Muslim community here in Arizona, but it’s also popular in other states,” Nurhussen said.

Achieving huge success a few months after launching last November, Nurhussen said a lengthy planning process allowed their grain of an idea from 2013 to grow.

“We spent those three years learning the ins-and-outs of the business of garment manufacturing, and networking with people in the business,” she said.

“We went to textile trade shows in New York and L.A. It definitely took us longer than we expected, because we realized how much goes into producing a product.”

While the company may expand in the future, Amara was born in Phoenix and the city will remain Nurhussen and Hassan’s home.

“Eventually we do want to expand to other parts of the country – maybe to an East Coast location,” Nurhussen said.

“But for now, we’re trying to build a strong presence here in Phoenix.”