Noor Rabah, vice president of Muslim Community Patrol & Services, outside the Police Department's 72nd Precinct, with a car the group intends to use to patrol neighborhoods in Brooklyn. CreditCreditJames Keivom for The New York Times
aaa

The self-funded group sees itself as a neighborhood watch. But there was alarm after its cars were spotted in Brooklyn without warning, or explanation

NEW YORK – The sight of a white and blue car with emergency lights and men in navy blue uniform may be quite assuring for many people.

Yet, a new community patrol unit set up by Muslim men in New York to help detect and report suspicious activities to police has triggered  both positive and negative reactions, with some supporting it and others saying no thanks, New York Times reported.

“It’s like a neighborhood watch but on steroids,” said Noor Rabah, the group’s 31-year-old vice president who lives in Sunset Park.

Rabah is among the first 30 members of the all-volunteer Muslim Community Patrol & Services who were trained by off-duty officers from the Police Department’s 72nd Precinct.

The patrol is preparing to operate in neighborhoods in Brooklyn, with a goal of growing its fleet of two cars to five by the end of the month and eventually expanding citywide. 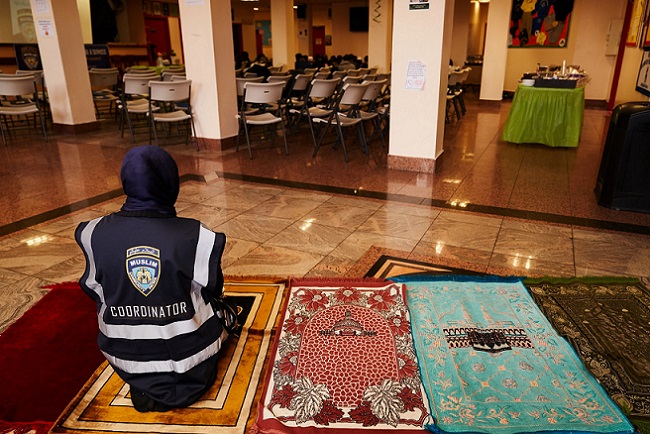 A Muslim Community Patrol volunteer, Mahwish Razi, joined other members in prayer before a training session.CreditJames Keivom for The New York Times

The patrol is not the first to operate in NY and America.

There is already the Shomrim that patrols largely Hasidic neighborhoods in Brooklyn and the Brooklyn Asian Safety Patrol that operates mainly in Sunset Park.

The unarmed civilian patrol will offer translation services, its members are fluent in any of seven languages, explain cultural nuances, report suspicious activity, respond to traffic accidents and even help in searches for the missing.

“Presence is prevention,” Rabah said. “Just us being around should deter the average criminal mind of doing something to harm another person.”

“More than buildings went down in 9/11. Trust between communities went down,” Adams said.

“We are building it back one brick at a time, and this patrol is one of those bricks.” 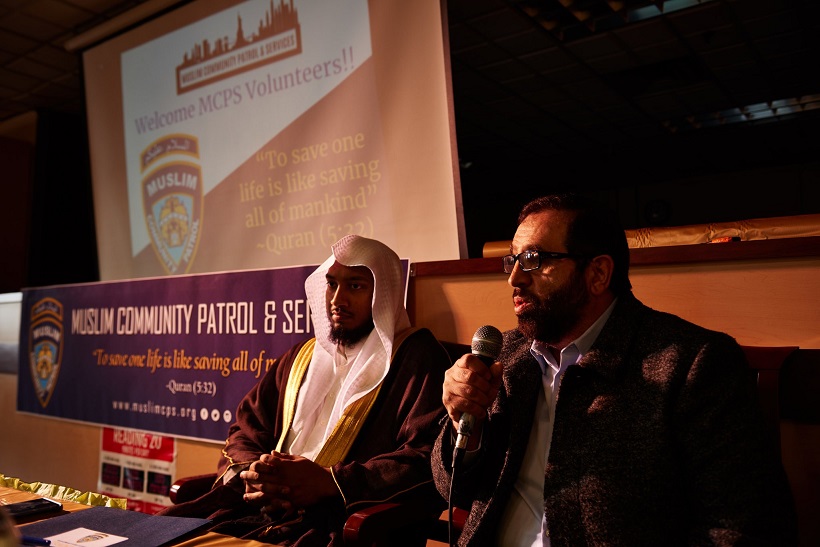 Sami Razi, right, president of the new patrol group, and Imam Nazrul Islam, a member, spoke last week before a training session at Al-Madinah School in Brooklyn.CreditJames Keivom for The New York Times

Maeen Ali, a member of the patrol, said that patrol idea followed the fear that spread last year when the “Punish a Muslim Day” letters went online.

Ali, who lives in Downtown Brooklyn and helped found Mercy Bakery, a nonprofit that runs bakeries and provides free loaves of bread to families in need, said he was consumed by thoughts of his four children’s safety.

“That’s when I said to myself that it was really important to come out and protect Muslims in the community.”

As conspiracy theories about a Muslim community and travel ban that blocked Muslim immigrants spread online, the patrol faced a huge backlash online.

Some Muslims were not also satisfied with the new patrol. Somia Elrowmeim, the adult education, and women’s empowerment manager at the Arab American Association of New York, based in Bay Ridge, said a single misstep from the patrol could reflect poorly on the city’s entire Muslim community.

Unlike the Shomrim, which patrols in vehicles and on foot, the Muslim patrol will operate only from patrol cars.

“We know our place: We are not cops,” Rabah said. “We are simply patrollers for the community that also serve as the eyes and ears for the NYPD.”

New York City is home to an estimated 769,000 Muslims. They make up about 9 percent of the city’s population, but represent 22 percent of all Muslims living in the United States, according to Muslims for American Progress.

In 2017 in the city, there were 14 reported anti-Muslim bias incidents, according to the Police Department’s annual report. Last year, there were 14 bias-crime incidents recorded against Muslims during the first three quarters of the year, the most recent data available.

Huda Quhshi, the owner of Le’Jemalik Salon & Boutique in Bay Ridge, said she felt a “spark of happiness” when she saw a video of the patrol car on Instagram.

“With everything going on, you sort of feel like the whole world is against Muslims,” she said. “So it feels good to know that there is someone there, watching out.”