NEW JERSEY – A New Jersey Muslim man has been praised as inspirational for stepping in to stop two brawling teens engaged in a street fight, and this eventually led both young men to shaking hands in peace.

“I’m a Muslim. I was raised by Muslim parents. That’s what we were taught in my house, always, growing up,” Ibn Ali Miller, 26, told The Time.com on Wednesday, March 22.

“For me, I don’t look at it like I’m a peacemaker. I did what I was supposed to do, what I was raised to do.”

The incident went viral after a video showing the street fight captured the internet’s attention.

In the video, the two young men are seen brawling in the middle of a street in Atlantic City, NJ, as their peers hit record on their phones and egg on the action.

Before things get too rough, a man approaches and shames the group.

“Everybody on your phones though, all y’all, y’all the real cowards. Record that too,” the man, Miller, says.

The footage was posted on Facebook on March 20, where it has since been viewed more than 31million times by users from across the world. 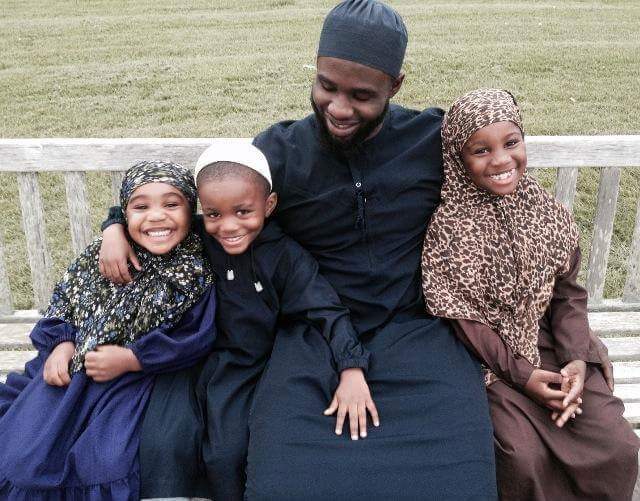 Ibn Ali Miller, pictured second from the right with three of his children, is being lauded for stopping a fight between two youngsters in Atlantic City, New Jersey. Photo courtesy Ibn Ali Miller

Pulling from his drive to defuse the fistfight, Miller received widespread praise as a hero, including from NBA star Lebron James.

“I stepped in just because it was the right thing to do,” he said. “Those kids didn’t look like predators to me. To me, I saw my own kids. I didn’t see predators.”

Miller, who’s studying at Masjid Muhammad of Atlantic City Inc., says it was a hadith from the Prophet Mohammad, which propelled him to step out and speak up. “The strong is not the one who overcomes the people by his strength, but the strong is the one who controls himself while in anger.”

“Sometimes when you’re young like that, and you lose a fight in front of your friends and it goes on Facebook, it could hurt you for a long time,” he added.

One of the teens in the fight, Jamar Mobley, told NBC Philadelphia, “The one thing he said that got through to me was that, he explained to all my friends, who I thought were my friends, all of them just wanted to see a fight.”

So dope!!! #Salute the homie who stepped in and spoke real to our young generation. We all need a word or 2 to help! https://t.co/hJ4BT611sw

James Lebron said Miller’s actions were “so dope” in a tweet. He added: “Salute the homie who stepped in and spoke real to our young generation. We all need a word or 2 to help!”

Ibn Ali was honored for his actions in Atlantic City Wednesday. Ali was in tears as he described the impact his mother had on his life.