CAIRO – The first-ever female Muslim police officer has been hired in New Portland police, making history for the Somali community in Maine.

“This is history for us,” Fatuma Hussein, executive director of United Somali Women of Maine, who could barely contain her enthusiasm, told Portland Press Herald on Saturday, January 9.

Zahra Abu is “young, energetic. She stands for a lot of youth, who really deserve the opportunities such as that and I think she’s going to pave the way for many girls, women, boys and men in our community.”

Abu was born in a Kenyan refugee camp before immigrating with her family to the US.

Graduating from Deering High and University of Southern Maine (USM), she pursued her dream of becoming a police officer.

Though she considered studying law at first, but her brother, Ilyas Munye Abu, a police officer in Worcester, Massachusetts, talked her into pursuing an internship with the Maine State Police instead.

“I told her it’s very rewarding when you go home to your family and can say you helped people,” he said.

After going through a rigorous series of physical and psychological exams representing a variety of life experiences, she was sworn in during a ceremony Friday at City Hall.

“I feel very grateful for this opportunity. … I like helping people.”

Portland Police Chief Michael Sauschuck said Abu has a different background from many in the department, but she went through the same process as everyone else to become an officer.

“There’s no question that we want to be as diverse as our communities, but we will only hire the best, and I do believe she is one of them,” he said.

“I hire good human beings and then we make police officers from them.” 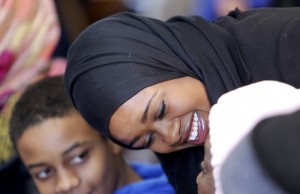 The Muslim officer’s appointment offered a role model to the Somali and immigrant community in Maine, giving them a sense of belonging and a sense of ambition.

“She will be getting a lot of phone calls. She needs to be ready for that. She’ll be getting knocks on her door.”

“It’s wonderful for the entire new Mainers community because they need role models. They need to feel that they belong and are included, and that this is their country as well and their community as well,” he said.

Jalali added that Abu was also breaking down barriers for other women.

“She’s shattering some kind of ceiling and stereotypes and barriers that her own community has,” Jalali said.

“Now maybe some girl wants to be chief of police, attorney general,” he said. “That’s how it starts.”

Abu’s move to join the police cadres will certainly motivate others in the community to seek a similar position, Hussein said.

“You will have many immigrants graduating from college that will look into law enforcement because she made that bold move for them. She laid the foundation,” Hussein said.

“She has made history. Nobody can take that away.”