DENVER – Muslim volunteers gathered on Saturday, October 28, to pack and distribute 2000 lunches to homeless people across Denver, Colorado, as part of an event held across 20 cities.

Ibrahim led a more than 100 Muslim volunteers as they made and distributed 2,000 lunches to homeless people across the city.

The effort was the first year Denver joined roughly 20 other cities in the initiative started by Chicago-based nonprofit Pious Projects.

Working through Saturday, Muslim volunteers made sandwiches and packed bananas, granola, and water.

“Do good work but fast work, friends,” she told volunteers. 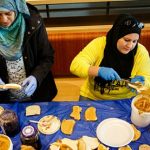 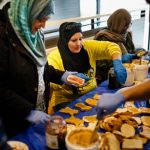 Islam puts an emphasis on feeding the hungry. Prophet Muhammad is believed to have said, “He is not a Muslim who goes to bed satiated while his neighbor goes hungry.”

The grassroots effort was organized as an event on social media, allowing many volunteers to join and spread the word.

The group of volunteers ranged from 3-year-olds, who drew crayon smiley faces and stars on the brown bags, to people in their 70s, who made the PB&J sandwiches. Some volunteers had arrived from Syria six months ago. People of other faiths also assisted.

Giving back to their community, volunteers said they saw the event as connect people and explain true religion.

“When I heard about this, I jumped on the opportunity — even though I could have been working today — to do something for the people,” said Dr. Aziz Nsier, who has a practice in Fort Lupton that will give free services to those who cannot pay.