QUEBEC – Sharing their stories with the public, dozens of Muslim volunteers gathered in a special event on Saturday in Quebec, in an effort to challenge stereotypes and prejudice.

“I felt the responsibility, the desire to speak out, to say, ‘We have different beliefs but we live like everyone else,'” said Naïla Khalil, who describes herself as Tunisian, Muslim and “Québécoise,” CBC reported.

Khalil was speaking at the Monique-Corriveau library in Sainte-Foy to people who gathered to hear first-hand stories of Muslim people who chose to live in Quebec.

The city’s public health agency, the CIUSSS de la Capitale-Nationale, organized the event, what is being called a “Human Library”, along with several local organizations and mosques, in an effort to challenge stereotypes and prejudice.

Arriving in Quebec in 2015, after a six-year wait, Khalil now works as a computer analyst with the Quebec government.

“I had always dreamed of coming here, it was really a special moment,” she said.

Yet, everything changed after the Quebec mosque shooting last January 29, in which six Muslims were killed, including her friend.

Choosing to step forward and clear misconceptions, the mother of two now takes part in these events to correct people’s misunderstandings about her faith.

“It really shocked me. I was depressed, seeing all these heinous comments on social media, on the news, it was very difficult,” she said. 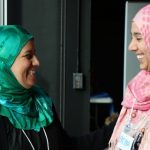 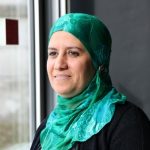 Khajida Zahid also said her perspective had changed since the attack.

“As a woman who wears the veil, it’s a topic that comes up all the time, in the media, at the National Assembly, that it’s a danger for Quebec society. And that affects me because it’s not the truth,” Zahid, who came from Morocco in 2007, said.

“We come here because we are invited. [The government] knows immigrants coming from North Africa are in majority Muslim, and that they will bring their religion with them,” Zahid said.

Brigitte Paquet, who works with the CIUSSS de la Capitale-Nationale, said that these events became urgent after the Quebec mosque attack to help the Muslim community recovery process.

“We wanted to make sure that people will understand their whole life story, and also answer questions people might have on Muslim culture,” she added.