MURFREESBORO – Hundreds of people of all faiths rallied on Tuesday evening, July 11, to show support and love to Muslims across Middle Tennessee after a mosque was vandalized with bacon and hate graffiti.

“We want to show that Murfreesboro is a beautiful city. It’s way above hatred and racism,” Saleh Sbenaty, a member of the board of trustees of the Islamic Center, told the rally, WKRN.com reported.

“We want to show that the people of Tennessee, in general, and the United States is way above this wave of hatred and discrimination.”

The vandals spray-painted curse words and intolerant phrases on the Islamic Center of Murfreesboro and left bacon on the front entrance, both in the doorway and around the door’s handles.

The attack is being investigated as a hate crime.

People of all faiths showed up Tuesday night to support the religious community. 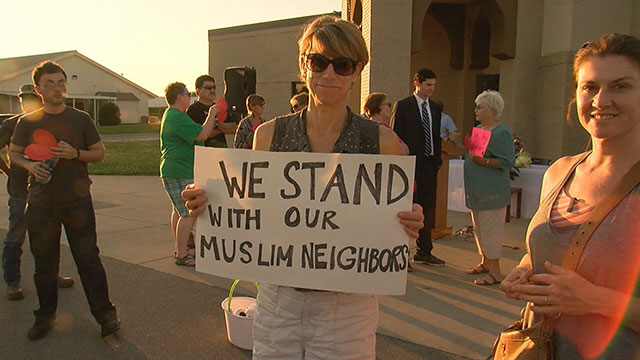 Wolf added she wanted to express solidarity with the Muslim community.

“We also were so grateful, profoundly grateful for the show of support that the Muslim community gave to us during the multiple bomb threats against the Gordon Jewish Community Center.”

Mosque members and volunteers on Monday night began the process of cleaning up the mess left behind by the vandals.