ST. PAUL – In a nice gesture to strengthen bond between its staff and the Muslim community, the police department of St. Paul in Minnesota hosted a Ramadan Iftar for its officers and 50 members of the Muslim community at the Western District station on June 12.

“I attended such gatherings in the community but, I can’t recall another time that one was held at the St. Paul police department,” he continued.

On his behalf, Kanyare said: “We don’t want to only call on the police in emergency cases or for the police to only come to us when something bad happens.”

“We want to continue to build the relationship between our community and the police,” he concluded.

According to the 2010 survey of Pew Forum on Religion and Public Life, Muslims made up 1% of the total population of Minnesota. 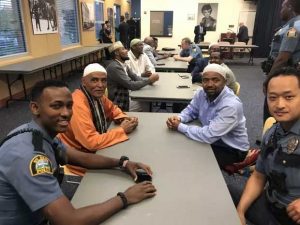 Iftar or breakfast is the evening meal with which Muslims end their daily Ramadan fast at sunset. Muslims break their fast at the time of the call to prayer for the evening prayer.

This is their second meal of the day; the daily fast during Ramadan begins immediately after the pre-dawn meal of Suhur and continues during the daylight hours, ending with the sunset with the evening meal of Iftar.

Ramadan is the 9th month of the Hijri Calendar and is observed by Muslims worldwide as a month of fasting to commemorate the first revelation of the Qur’an to Prophet Muhammad (PBUH).

Fasting Ramadan is an annual observance that is regarded as one of the Five Pillars of Islam. The month lasts 29–30 days based on the observation of the newborn crescent moon.