“I’m humbled beyond words for the support that I have received. I would like to start by thanking the mayor and council members for their support and having the confidence in me to lead the department,” Rabboh said.

Rabboh, 46, is the second Muslim police chief in the state of New Jersey, with the first being Ahmed Naga of Long Hill Township, who was in attendance at Rabboh’s swearing in.

Rabboh was sworn in by his childhood friend, John Abdelhadi, the chief judge for the Paterson Municipal Court, with a copy of the Qur’an. 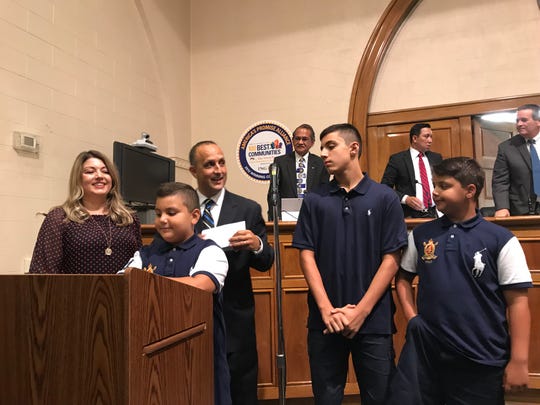 Bergenfield’s new Police Chief Mustafa Rabboh with his wife, Eva, and his sons, Aiden, Ameer, and Adam after Rabboh was officially sworn as chief during the Borough Council meeting on August 20. (Photo: Ricardo Kaulessar/NorthJersey.com)

Attending the event, New Jersey Attorney General Gurbir Grewal, the first Sikh-American Attorney General in the United States history, lauded the appointment of Rabboh for setting an example nationwide at a time of rising anti-Muslim sentiment and rhetoric in this country.

In the same month, a Muslim woman made history in New Jersey, becoming the first Muslim woman to join the city’s police force.