MALDEN, Mass. – The Muslim community in Malden, Massachusetts, will be holding the second annual Muslim festival in the city, featuring music and food representing the rich, diverse heritage of the community.

“We were thrilled by the success of last year’s festival, and we can’t wait to welcome our community again this year,” said Malika MacDonald, one of the organizers who has long been active in her community through Islamic Circle of North America Relief USA, MassLive reported on Wednesday, September 13.

“In these times of widespread misunderstanding about American Muslims, it’s more important than ever that we show our neighbors who we truly are.”

Presented in partnership with the city of Malden and Cambridge Health Alliance, the second annual New England Muslim Festival will be held on Sunday noon to 6 pm.

Volunteer organizers of the cultural event, designed to “welcome one and all to learn about Islam and get to know it,” say last year’s festival attracted some 3,000 participants to this diverse suburban city, of 60,000 people, about five miles northwest of Boston.

“The festival is an opportunity for people to come together and celebrate our differences in a relaxed setting,” MacDonald said.

“It’s kinda ‘come have fun with a Muslim’ approach, as in we’re human too. It gives people an opportunity to experience the arts and culture of the Muslim world dispelling many of the stereotypes associated with Muslims,” she added.

“What better way than through food and entertainment to develop relationships. We welcome the curious to come, enjoy and enter into dialogue with those attending.” 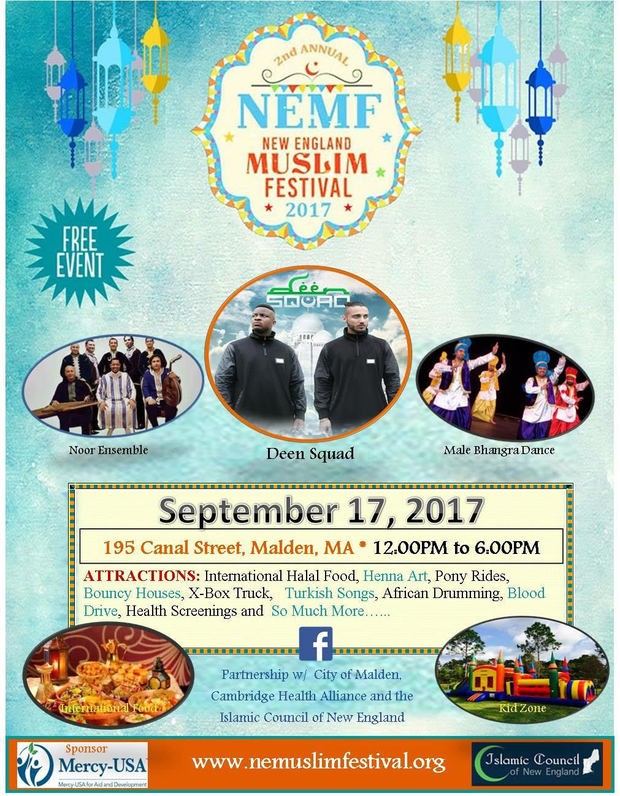 The festival will include entertainers such as Deen Squad, consisting of two musicians from Canada dedicated to combining “the raw essence of the urban hip-hop genre with core tenets of spirituality and values in the effort to arouse appreciation of the contemporary Muslim identity in today’s youth.”

It will also feature a troupe presenting Bhangra dance and music, associated with northwestern India and northeastern Pakistan; and the Turkish Musical Orchestra.

The free event will also include a Kid’s Zone with rides and activities, an informational booth with a “Try on Hijab” table, the head covering worn by Muslim women, and a professional henna artist as well as an international bazaar with food stalls.

According to the Pew Research Center, Muslims comprise 1 percent of adults in Massachusetts with Christians at 58 percent and Jews, 3 percent. Of the 58 percent who are Christian, 34 percent identify themselves as Catholic.

In the Greater Boston area, according to the Pluralism Project of Harvard University, Islam “encompasses a diverse community of over 50,000 adherents served by nearly 50 different mosques, schools, and community organizations.”