“We organized things that make the environment friendly, so that it’s fun, and to break down the barriers between Muslims and non-Muslims,” Laila Alsharie told Boston Globe on Sunday, September 26.

“So that they can see who we are: just regular people.”

Alsharie was standing near a table covered with a veritable rainbow of hijabs, calling for everyone to try on the head scarves that Muslim women often wear.

Olivia Kirkpatrick and her sister Alessia, both non-Muslims, tried a purple-and-pink and bright blue hijabs.

They were among thousands of visitors who flocked to the first-ever New England Muslim Festival held on Sunday on Malden City Hall Plaza. 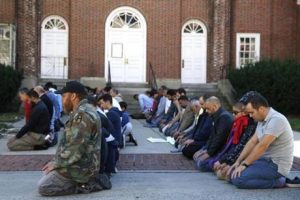 There was also a table with halal gummy watermelon candies made with beef gelatin instead of pork gelatin, deemed haram for Muslims.

“My parents, growing up, told me that the point of life is to share and as a result, our world will become a better place,” said Christenson, the mayor, who read a statement in Arabic when he greeted the crowd.

Muslim too, who performed prayer in public, welcomed the sense of belonging the festival gave them.

“I never knew there were this many Muslims in Massachusetts,” Safia Mohamed, who emigrated from Kenya two months ago to attend Bunker Hill Community College, said.